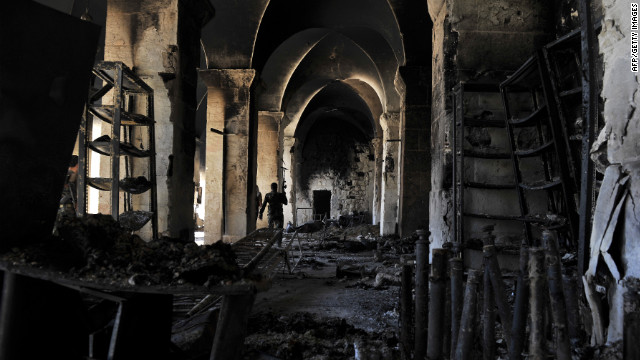 A Syrian rebel walks inside a burnt section of the Umayyad Mosque. Opposition activists reported that the 12th-century mosque was set afire during heavy fighting on Saturday, October 13.
October 15th, 2012
06:30 AM ET

The war in Syria has prompted another war of words internationally, with Russia slamming a report that accuses the Syrian air force used Russian-made cluster bombs on rebels.

"There is no confirmation to this. ... There are loads of weapons in this region, including in Syria and other countries of the region, and arms are supplied there in large quantities and illegally," Foreign Minister Sergey Lavrov said, according to Russia's RIA Novosti news agency.

Citing witnesses and videos, Human Rights Watch released a report Sunday saying Syrian government forces were using cluster bombs - explosives that can kill or disfigure anyone hit by its fragments.

The report says the cluster bombs are Soviet-made, though it does not state how or when Syria allegedly acquired them.