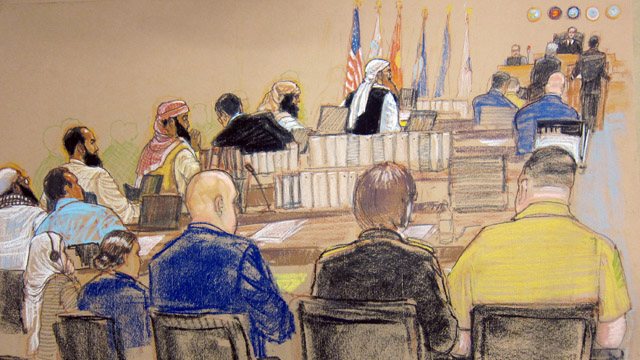 The list that the judge, Army Capt. James Pohl, developed to address concerns when a detainee voluntarily waives his right to be present at trial, was agreed to by both defense and prosecution. But one of the questions, regarding their rights should the defendant be out of control of the U.S. military, caused considerable confusion.

The list was read to each of the detainees to measure their understanding.

It became the "escape" question when the judge refined the broader concept of not in U.S. custody with a hypothetical escape scenario.

Pohl: “And do you understand this commission can continue if you're not in custody?”

Ramzi Binalshibh (in English): "That is a very wide word. Can you be concrete?"

Pohl: “I'm not saying you're going to escape, but if for some reason you get out of military control, this trial could continue.”

Binalshibh: "Escaping?"  There's a pause. Military members in the hearing room and standing along the walls are smiling. Finally, Binalshibh answers: