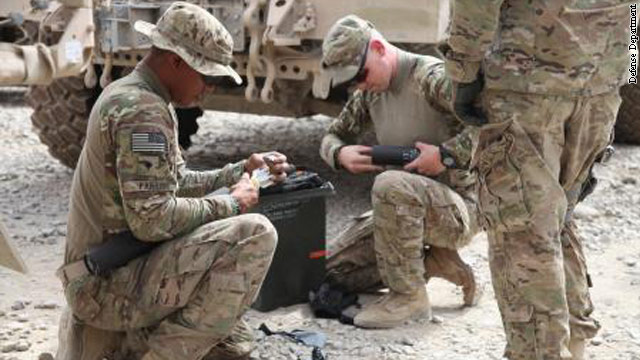 A report last week by Security Clearance has spurred senior U.S. Army officials to quickly buy and field an anti-roadside bomb system for thousands of soldiers deployed to the violent eastern part of Afghanistan, according to Army documents obtained by CNN.

The documents show that senior Army leaders were scrambling last week to purchase the equipment, known as Palantir, for the 4th Brigade Combat Team (4th BCT) of the 1st Infantry Division "as quickly as possible" in response to reporting that highlighted delays and denials of requests for the Palantir system by Army leadership.

The 4th BCT, based out of Fort Riley, Kansas, initially requested the software before its spring 2012 deployment and was rejected by the Army.

Late last month, the Army approved an emergency request made by the 4th BCT after it arrived in Afghanistan, but e-mails obtained by Security Clearance seem to show that senior Army officials were not aware of any plan to purchase or field the equipment for the 4th BCT, possibly delaying the arrival of the equipment.

Security Clearance agreed not to reveal the names of the Army staff because of privacy concerns.

"The capability must be procured for 4/1 as quickly as possible," according to the Army e-mails.

"Please see his note below and the CNN article regarding Palantir to the 4/1 ID ... [name withheld] needs to know the way ahead for procuring Palantir for 4/1," according to an e-mail between senior Army officials sent late last week in preparation for a meeting with Capitol Hill staffers from the major defense committees.

"We'll need to know ... the timeline to put this on contract and the estimated date the capability will get to 4/1," the e-mail continued.

"With the Army, every request for Palantir has been met with some type of resistance, and this is just one more example in a growing list. And in situations where there's been approval, the Army has dragged its feet and delayed delivery while units continued their combat mission in Afghanistan without resources they urgently and repeatedly requested," said Rep. Duncan Hunter, R-California, a member of the House Armed Services Committee.

Hunter, an Iraq and Afghanistan war veteran, has been at the forefront of this flap, calling on the Army to explain delays in getting the Palantir system into the field as soon as possible.

The Palantir software was developed outside the military procurement system and is favored by many soldiers in the field. But the Army has been using its own technology in Afghanistan: the Distributed Common Ground System (DCGS), which many soldiers believe to be inferior to Palantir when it comes to hunting improvised explosive devices.

In last week's reporting, Security Clearance showed that one request for Palantir by a unit from the 2nd Infantry Division was eventually approved, but because of the bureaucracy involved in buying and fielding the system, it did not reach the soldiers until the end of their tour, so it had little effect in the field before they deployed back to the U.S.

The latest e-mails do seem to show that Army leaders are trying to get Palantir to the 4th BCT as soon as they can, but the more than 3,000 troops in the unit may start deploying home as early as February, just four months away.

Army officials did not respond to questions by Security Clearance for this report.

Security Clearance also reported a list of major Army divisions or elements of divisions that have been blocked or stymied from using the software system in Afghanistan. Those units include the 101st Airborne, 82nd Airborne, and the 3rd and 2nd Infantry divisions, according to sources with knowledge of the request denials and delays.

But Army officials say that some Army units are using the system in the field and that some of the requests were denied for commonsense reasons.

"Some units requested Palantir and were rejected because they were replacing a unit that was handing its Palantir system over to them, so if there was seven more months on the contract, it would not be cost effective to buy a new one," Army spokesman Lt. Col. Freddie Mack said last week.

While the Army has said it is using Palantir in the field in limited quantities, it is also testing the system and how it integrates into DCGS. Results from those tests were due last month but have yet to be released.