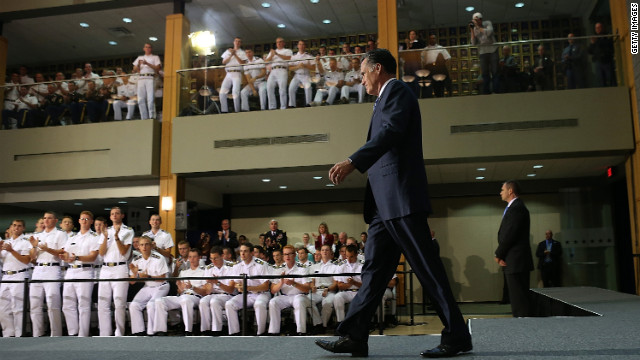 Romney lashed out against Obama's handling of protests in Iran, insisting the president failed to weigh in publicly when Iranian demonstrators were met with violence while protesting the disputed elections three years ago. "When millions of Iranians took to the streets in June of 2009, when they demanded freedom from a cruel regime that threatens the world, when they cried out, 'Are you with us, or are you with them?' - the American president was silent," Romney said.

Trying to equate the U.S. Navy's size to Obama administration policies, Romney also said the fleet was as small as it was around World War I and vowed he'd boost its size if he became president. In an effort to augment the force and power of the Navy, he suggested bolstering the Navy overall by building 15 ships a year, including three submarines.

Fact Check: Has Obama 'not signed one new free-trade agreement'?

The former CEO of Bain Capital criticized Obama’s business record, saying he "has not signed one new free-trade agreement in the past four years," and assuring the audience he would "reverse that failure."

Leave a Reply to Amit-Atlanta-USA.