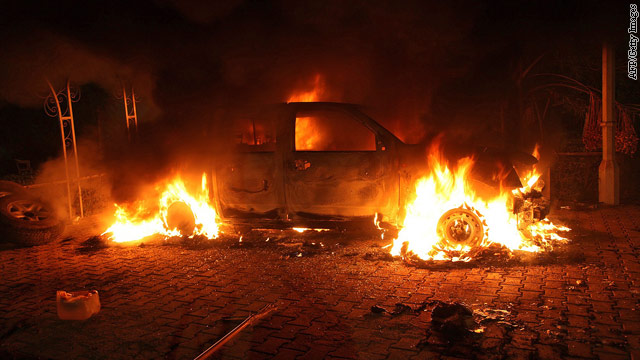 US, Libyan officials meet to assess what went wrong

Here is the latest reporting from CNN's Jomana Karadsheh in Tripoli, Libya:

A senior Libyan official who spoke on the condition of anonymity told Karadsheh that U.S. and Libyan officials have held a series of meetings to "assess what went wrong" in Beghazi that resulted in the death of the U.S. Ambassador and three other Americans at the U.S. consulate there. The meetings included: security experts; U.S. officials, some who had flown into the country from the U.S.; the Libyan Prime Minister elect; the General National Congress President along with other Libyan officials.

Following the attack, the senior Libyan official said "we felt, assumed and suspected" that there would be an increase in U.S. drone activity over parts of eastern Libya and were very concerned that the US administration could take military action. He said they worried the Obama administration would be "pushed to do something crazy" by domestic political considerations. He says that would have been "very unacceptable" and GNC head Mohamed Al-Magariaf had spoken with the White House "to contain the situation."

The official said the Libyan officials urged the Americans to work with them "in full partnership" because any military action during this "fragile and sensitive situation" would give the two main threats to the state- the extremists and Gadhafi loyalists– "an excuse." Because of the "strategic objectives for both of us and understanding our enemy," the official said any military action would create "absolute chaos." In other words any precipitous military action on the part of the US would be counter-productive, hit no-one of any value but further embolden extremists in eastern Libya and make the area ungovernable.

The official also asked "What would they strike?", and kept stressing that there was no target. Furthermore, he said the Libyan government had no intention of using force against the radical groups in the eastern part of the country.

The official said they had no evidence the Benghazi attack was pre-planned. He said Libyans believe it was one of two scenarios: 1) a protest gone horribly wrong and violent or 2) extremist groups protesting then realizing they had a good target of opportunity. The official said he believes the first option is the most likely at this stage.

He said in the past few days religious scholars and figures have been dispatched to Derna and Benghazi to speak with members of groups like Ansar al-Shariaa. According to the official, the scholars are being well received.

Over the past few days, TV shows have been airing in Libya with religious figures speaking out against targeting foreigners and the bad impact that has on Libya.

The official was very concerned about the deteriorating regional picture. "They [the United States] are losing Egypt, if they lose Libya ... they and we cannot afford to lose our partnership," the official said.