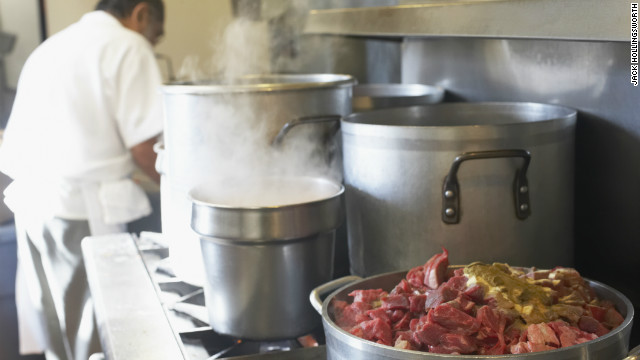 Cooking up a new type of diplomacy

They newest tools in Secretary of State Hillary Clinton's diplomatic arsenal: knives and a pepper mill.

The kitchen implements belong to her new diplomatic warriors, which include 80 of America's top chefs in the State Department’s newly-minted Diplomatic Culinary Program. They will prepare meals for foreign leaders visiting the United State and travel overseas for cooking demonstrations and educational programs with foreign audiences. They also will host culinary experts from around the world in their kitchens back in the United States.

The program, co-sponsored by the State Department and the James Beard Foundation, officially debuted last week with a reception featuring tasty treats from some of chefs, whose upcoming diplomatic missions will span the globe.

"Food isn't traditionally thought of as a diplomatic tool. But I think it's the oldest diplomatic tool," Clinton said in a video played at the State Department ceremony. "Sharing a meal can help people transcend boundaries and build bridges in a way that nothing else can. Certainly some of the most meaningful conversations I've had with my counterparts all over the world have taken place over breakfasts, lunches and dinners."

For her state lunches, Clinton has showcased the work of American chefs, incorporating their cuisine with that of her guests' home countries.

Many of the chefs in the new American Chef Corps have already achieved commercial success and are national celebrities in their own right, thanks at least in part to the proliferation of TV cooking shows. Pastry chef Jeffery Adam "Duff" Goldman, host of the Food Network's popular show "Ace of Cakes" who made cake decorating an extreme sport, displayed an infectious enthusiasm when talking about his new role.

“This is so cool,” he screamed to the audience as he joined his fellow State Chefs on the podium.

This fall he will travel to Colombia for a demonstration on cake decorating for as many as 6,000 people.

The former graffiti artist and metal sculptor says he will also discuss the "relationship between art and food. Chefs will make perfect diplomats, he said, because they speak the universal language of food.

You don't have to share a mother tongue to understand "spicy," he said.

"When you're cooking with somebody even if they don't speak your language you're still cooking with them," Goldman said. "We've shared experiences in our careers, in our lives, in our passion of the things that we really believe in; feeding people, making people smile, giving them joy. And I don't have to speak the same language to know that, that's something they enjoy as well. "

In addition to sharing the American culinary experience, the program is designed to promote issues related to global food security, a priority of President Barack Obama and Clinton since they took office.

"Right now we're dealing with hunger at levels that are unconscionable both inside this country and around the world, we're dealing with obesity ... the way we grow our food, how we should support our food," Kass said. "All these issues come to our plates every day."

Jose Andres, who owns several successful restaurants in Washington and Los Angeles and has cooked for previous State Department diplomatic receptions, serves as culinary ambassador for the Global Alliance for Clean Cookstoves. The program, co-sponsored by the State Department and the United Nations Foundation, works to develop new portable stoves for the developing world that are not as dangerous, harmful to the environment or to the health of those who use them.

Andres has founded the World Central Kitchen, a foundation focused on feeding the world’s most vulnerable, supporting local producers and developing environmentally sustainable cooking technologies. He has been to Haiti several times with the Solar for Hope project, an initiative to bring solar kitchens to the island nation. Later this year he will return to Haiti to work at orphanages, schools, hospitals and residences, teaching them how to use clean technologies to prepare meals.

"I am learning," he said. "For me, going to Haiti has been an MBA on how to help other communities."