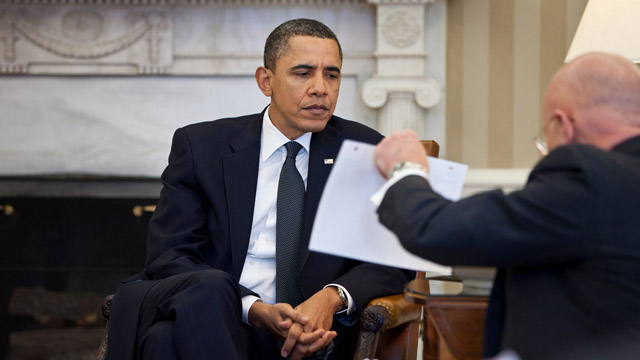 The president's spokesman disputed a Washington Post item that suggested the commander-in-chief has not attended the Presidential Daily Brief (PDB)  "more than half the time."

The PDB is a daily rundown of threats and developments as assessed by the national security community. It is a top secret written document that is read by the President and his inner circle of security advisors and is often accompanied by in-person briefing by intelligence officials.

The opinion column by Marc Thiessen, a former speech writer for President George W. Bush, cites research by the conservative Government Accountability Institute, which studied Obama's daily schedule from his first day in office through June 2012.

During his first 1,225 days in office, Obama attended his PDB just 536 times — or 43.8 percent of the time. During 2011 and the first half of 2012, his attendance became even less frequent — falling to just over 38 percent. By contrast, Obama’s predecessor, George W. Bush almost never missed his daily intelligence meeting.

Asked about the article Monday, White House spokesman Jay Carney said the assertion that the president was playing hooky from his presidential daily briefings was "hilarious" :

MR. CARNEY: He gets it every day, okay? The President of the United States gets the presidential daily briefing every day. There is a document that he reads every day when he is not - well, he always reads it every day because he’s a voracious consumer of all of his briefing materials. And when he is physically here, most days he has a meeting in his office, the Oval one - (laughter) - with participants in - his national security team, including obviously Tom Donilon and others. He also has regular meetings with -

Q This is about the physical briefing from whoever is giving it versus the written briefing?

MR. CARNEY: This was a case of - I don't know how far I want to go here, but I believe if you compare our foreign policy record with the one that preceded this one, we’re comfortable with that comparison. And this President is very much steeped in the details of national security issues and the information that as President he received -

Q Do you believe this report was misleading -

MR. CARNEY: I believe the article written about it was amusing.