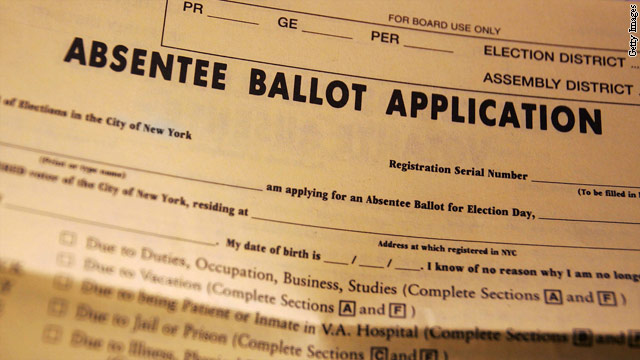 Military requests for absentee ballots are remarkably low this year, according to a recent report from a military voting advocacy group that faults the Defense Department with not providing mandated voter assistance to service members.

"The absentee ballot data for 2012 paints a bleak picture for military voters," a report from the Military Voting Participation Project says.

In Virginia, North Carolina, and Ohio less than 2% of all active-duty military members and their spouses have requested absentee ballots for the November election. And between 5% and 8% of military voters in Illinois, Colorado, Nevada and Alaska have made the request.

The report also cites less extreme examples, as in Florida where almost 16% of those eligible have requested ballots.

States profiled were those that had the most accurate and up-to-date information, according to the group.

The report estimates roughly two-thirds of all military voters would need an absentee ballot to vote because of their location at the time of the election.

The group expects absentee ballot requests to increase in the coming weeks but says the "alarming and significant decrease" will make it tough to meet 2008 request levels.

"Our service members have made tremendous sacrifices especially over the last decade and they should have a reasonable and fair opportunity to have their voices heard on election day," said Eric Eversole with the Military Voter Protection Project.

One of the main provisions of the law was to make it easier for active-duty military to register to vote, update their voting address and request absentee ballots by adding those procedures to the check-in process when a service member reports to a new duty station, much like when a civilian goes to the Department of Motor Vehicles to register a change of residency.

"In other words, under the new system, military voters would receive voting assistance each time they moved to a new duty station," the report states.

This check-in procedure has not been fully implemented according to the report, which cites this failure as having a significant impact on the absentee ballot requests for military voters this year.

All voting-assistance offices were supposed to be set up by November 2010, but several were not completed until late in 2011, according to the report and the Federal Voting Assistance Program, which is responsible for administrating the new rules. Several offices also are not located in the areas where service members check in to the base - places such as the library, gym or chapel - another criticism of the report.

The Defense Department did not respond directly to these criticisms but said the Federal Voting Assistance program is committed to facilitating the absentee voting process so that all service members have the opportunity to vote.

"We make resources available to the greatest extent possible, communicating the availability of these resources via myriad media. We continually evaluate our efforts to further streamline the process," the Pentagon said in a statement.