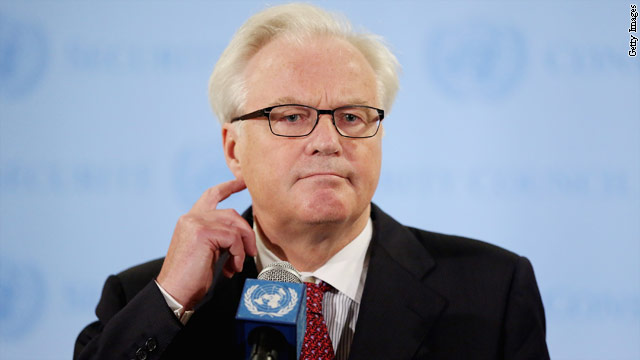 Wringing its hands over the escalating violence in Syria, Russia on Thursday said the international community should set a deadline for the Syrian government and opposition fighters to stop fighting.

Moscow's envoy to the United Nations, Vitaly Churkin, said countries that have failed to bring the killing to an end should make "a joint or parallel appeal to all the parties of the Syrian conflict that they end violence as soon as possible by a certain point in time."

In spite of the fact that almost 200 Syrians now are dying every day in the civil war, the Russian diplomat insisted a political solution is still possible and said other countries should urge the government of President Bashar al-Assad and the opposition to appoint negotiators who could establish a transitional governing body for Syria.

If that sounds familiar, it should; the proposal is part of a six-point plan put forward by former U.N. special envoy on Syria, Kofi Annan, who quit this month after failing to stop the bloodshed.

Moscow and Beijing have vetoed three U.N. Security Council resolutions criticizing the regime and threatening sanctions, and the Council is at an impasse.

With its monitors in Syria under fire and unable to move about the country to document the violence, the Security Council decided Thursday to end their dangerous mission.

The Russian envoy, however, blamed Security Council members who called for the observers to pull out.

"We believe that those members of the Council who insisted that UNSMIS can't continue," he told reporters, "did not really show commitment to ending hostilities and to working toward a political settlement in Syria."

"We don't think that they're able to do the job that they were sent there to do," Nuland said, "which was to monitor a cease-fire which we don't have and to be able to move freely around the country, which they haven't been able to do."

Russia is calling for a meeting at the United Nations in New York on Friday to discuss all of this, but Nuland threw cold water on that idea too, telling reporters at her daily briefing: "Frankly, we're not sure we understand the objective and the goal of the meeting."

"As we've said all along, to have meetings for meetings' sake is not what any of us needs to do. What we need to do is have meetings that support the Syrian people and support an end to the bloodshed."

Privately, a U.S. official told CNN the Russians are "stubbornly dug in" on Syria. Other U.S. and European officials say Moscow appears convinced that if al-Assad falls, the country could spiral into even more chaos.

If that happens they say, Russian President Vladimir Putin appears ready to blame the West, and particularly the United States, for it.

One European official adds that a possible motivation for Moscow's contrarian approach may be an attempt to prove to the world that Russia still wields diplomatic power and influence. But this official says it's not working.

"Their computer isn't updated," the official says, "and they are jeopardizing their position in the Middle East."

Under-Secretary of State Wendy Sherman, meanwhile, was in Moscow Thursday for what the State Department described as "very serious" discussions on both Syria and Iran. But, other than calling the talks "direct and fulsome," the Department noted no progress.

One Russian opposition member told CNN that Moscow's approach on Syria seems to be "do the opposite of what the United States wants."

"If the U.S. wants the Kremlin to do something good on Syria," Vladimir V. Kara-Murza, member of the federal council of the Republican Party of Russia, jests, "maybe Washington should do something bad."