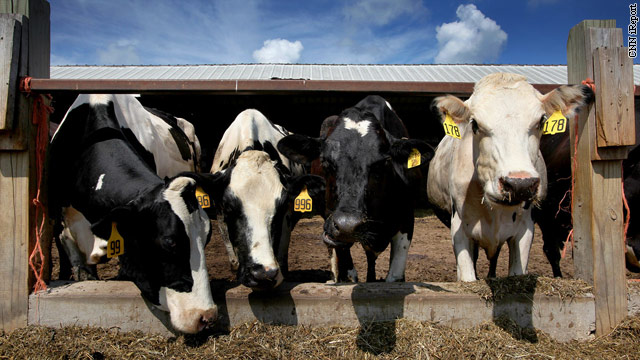 As part of the same directive, the Department of Agriculture will be buying up to $170 million worth of meat and poultry.

"Farmers and ranchers will have an opportunity to sell more of their products at this critical time, and taxpayers will get a better price on food that would have been purchased later," White House spokesperson Jay Carney told reporters earlier this week.

This can be seen as an "opportunity" for the Defense Department to purchase meat it will need in the future at a lower price today, according to defense budget analyst Todd Harrison with the Center for Strategic and Budgetary Assessments, but economists say the purchase isn't much more than a drop in the bucket for the livestock industry

"It's not going to make very much of a difference," said Jim Dunn, an agricultural economist with Penn State University. "This is one day's meat consumption," he said, referring to the $170 million the Department of Agriculture is directed to spend.

The epic drought has destroyed corn crops, forcing prices to sky-high levels. Livestock feed is primarily made up of corn, so ranchers have to dig very deep to feed the animals they plan to sell. As it becomes more expensive to produce heavier cows or pigs, ranchers are selling off their livestock sooner than usual.

With more product on the market, meat prices drop and with them the profits the ranchers need to buy more feed. The measure announced by the Obama administration is meant to raise the prices of meat by taking more product off the market.

But Dunn points out that the meat isn't disappearing. It's just going into the freezer.

"The meat is still hanging over our heads," he said.

Bruce Babcock, an economist at Iowa State University, agrees that the impact is questionable and that the purchases are just delaying the inevitable.

"Essentially what you are doing is taking purchases that will happen in the future and bringing them to today," he said.

The livestock industry must shrink to be able to afford the cost of corn, he said, meaning that some cattle and hog ranchers, for example, will begin to disinvest and reduce the size of their herds.

"The purchase is delaying the day of reckoning because what it does is, it will raise their prices somewhat now and it will allow them to purchase more feed, but that feed cost isn't going to go down for a year," Babcock said.

Even though the purchase is expected to make only a blip in the market, economist Bob Young, with the American Farm Bureau Federation, says you have to see any movement towards higher prices as a positive.

"It can't hurt," he said. "They're sucking product out of the system."

And with a presidential election just months away, the directive to move meat product off the market can also be seen as politically motivated.

"The people being hurt by the drought and the drop in meat prices are the farmers, the ranchers," said budget analyst Harrison. "So any move to help stabilize the market or keep prices from falling too far can be a political gain."

The meat purchases are more symbolic than truly meaningful for the Obama administration, which has criticized Republicans for blocking a $500 billion farm bill, said Dennis Goldford, a political scientist at Iowa's Drake University. Congress started its summer recess on August 2 without passing the bill, which includes relief for farmers and ranchers reeling from the drought.

"Here's an attempt on the part of the administration to get some credit among producers in the agricultural industry for being responsive to their economic difficulties under current conditions," Goldford said.

But he added that the move should not be seen in a cynical light.

"It's important to voters that their elected officials understand who their constituents are and the problems they face," he said.