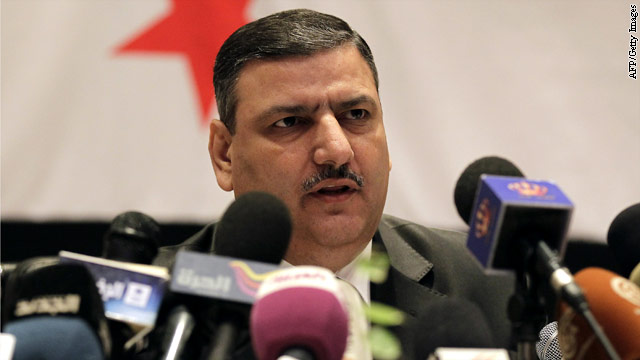 The United States lifted sanctions Tuesday against Riyad Hijab, the Syrian prime minister who recently defected from the regime of Bashar al-Assad and fled to neighboring Jordan.

The Treasury Department said that Hijab's ties to the Assad regime are severed, so he is no longer a senior official in the Syrian government and his name will be removed from the Treasury's list of people whose assets are frozen.

"Recent civilian and military defections from the Assad regime are further indications that the government is crumbling and losing its grip on power," David S. Cohen, the Treasury's under secretary for terrorism and financial intelligence, said in a written statement announcing the action. "The United States encourages other officials within the Syrian government, in both the political and military ranks, to take similarly courageous steps to reject the Assad regime and stand with the Syrian people."

The announcement comes amid revelations of Hijab's efforts to ensure that he would not experience reprisals for his short tenure as prime minister.

As Security Clearance reported earlier this week, Hijab had sought out contacts with the United States and other governments before his defection to receive guarantees that he would not be prosecuted for his role in the Assad government.

"He wanted assurances from the opposition that a post-Assad Syria will take into account all Syrians, including minorities, and there will not be revenge attacks on those who at one time supported the regime," an administration official said. The official described Washington's role as that of a "middleman."

The Treasury said one of the advantages of levying sanctions on specific people is that the sanctions can be lifted rapidly once the people leave the Assad regime.

Hijab's accountability as a former member of the Assad government would be addressed in another forum, U.S. officials said.

"This is not a judgment about his accountability, which is something for the Syrian people to decide," State Department spokeswoman Victoria Nuland told reporters Tuesday. "This is a judgment about whether he should continue to be subject to sanctions which are designed to squeeze the regime until it stops its bloody offensive. So this guy is no longer part of that offensive. And so, he should not be subject to sanctions."