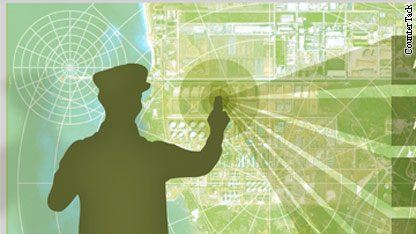 Some 80% of those polled believe that taking a more military-minded approach to the cyberwar could benefit business, according to CounterTack CEO Neal Creighton, whose firm released the poll Monday. For Creighton, that means incorporating more military-style intelligence gathering into companies' cyberworld defenses.

"We're talking about that great intelligence real-time situational awareness," said Creighton, who added that hackers will get into systems, and when they do, companies need to know in real time not only that the intrusion has occurred, but also what the hacker's intentions are.

"Today's attacks are very targeted, so when they come after you, they probably have something that no one else has seen before, so what we're advocating is once they have penetrated the network, that you have technologies that look at behaviors based on what the attacker is going to do," Creighton said.

CounterTack is one of several companies in the private sector that focus on gathering information on the threat as it is happening as a key strategy for defense, in addition to building effective firewalls.

But the CounterTack survey, though not a scientific one, found that those capabilities are lacking.

Surveyed executives said their most pressing challenges when it comes to combating "advanced persistent threats are "disparate systems that don't talk to each other" (63%) and having trouble gathering relevant attack 'intelligence' in real time (61%).

Cybersecurity experts have often warned that by the time a company realizes it has been hacked, the damage has already been done.

When it comes specifically to the issue of training these new cyberwar soldiers, 44% of executives, according to the CounterTack study, said that their team members didn't have the necessary technical skills to combat the threat.

CounterTack has hired retired Admiral William Fallon, who has experience heading both U.S. Central Command and Pacific Command to help them in their push to get companies to focus on this military-minded approach.

The head of U.S. Cyber Command, Gen. Keith Alexander, made a rare appearance at a hacker's conference in Las Vegas last month encouraging those with advanced cyber skill sets to put them to work for the U.S. government.

The Senate recently failed in its effort to pass basic cybersecurity legislation that would have allowed a closer public-private partnership when it comes to information sharing on cyberworld threats.

In light of that, the White House is mulling its options.

The President's homeland security adviser, John Brennan, suggested last week that the president may issue an executive order that would allow the government to use more of the tools it has on hand to combat the growing threat. Brennan added that such a measure would likely encompass a combination of resources from the Department of Homeland Security, the National Security Agency and the FBI.

Leave a Reply to Jordan Esler