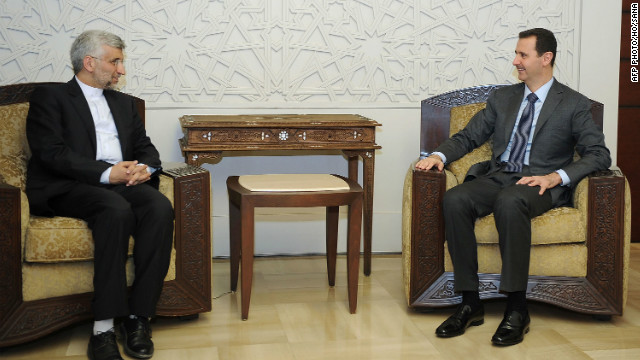 In public at least, the message was defiant. Beleaguered Syrian President Bashar al-Assad, sitting alongside Iran's intelligence chief, proclaimed Tuesday "the determination of the people and government of Syria to cleanse the country of terrorists."

His Iranian visitor, Saeed Jalili, responded, "What is happening in Syria is not an internal issue but a conflict between the axis of resistance on one hand and regional and global enemies of this axis on the other." Jalili's comment was made public by the Syrian news agency that al-Assad's government runs.

Ayham Kamel of Eurasia Group believes the Iranians must be alarmed that the tide is running fast against al-Assad.

"Iran probably has excellent information regarding Assad's position. That information would make clear that Iran is increasingly likely to lose its only ally in the region, greatly reducing its strategic reach," he says.