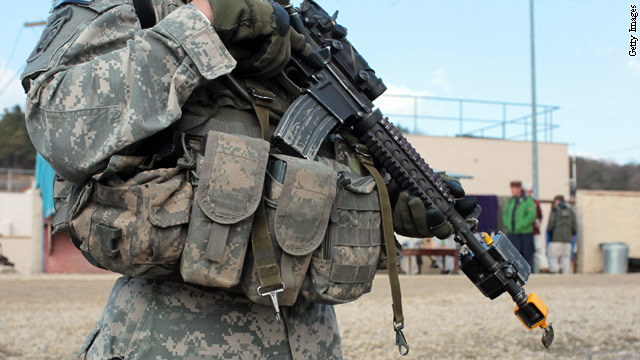 A group of legal and military experts will examine how major criminal accusations against service members in deployed areas are handled, under a new directive authorized by Secretary of Defense Leon Panetta and announced Friday.

"We know that over the last 10 years in Iraq and Afghanistan, bad things have happened involving combat excesses and innocent civilians in deployed area," Panetta wrote in a memo announcing the makeup of the newly formed Defense Legal Policy Board.

"The abuses have been rare among our professional fighting force, but they became huge flash points that threatened to undermine our entire mission."

Jeh Johnson, the Department of Defense's top lawyer, said the action is "part of the secretary's ongoing interest in accountability, particularly in deployed areas."

"We think that this is something that is worth review every once in a while. ... And we want to ask ourselves, is the system working like it should," he said.

The review of past crimes against civilians will be done by a subcommittee of the Legal Policy Board.

But their aim is not to retry past cases. "It's not about a review of the results of a particular case," Johnson said.

Nor will the subcommittee examine current cases moving through the military justice system, such as that of Army Staff Sgt. Robert Bales, who is charged with the premeditated murder of 16 Afghan villagers in March.

"This is not about any pending cases, nor should it be," Johnson said.

While no one particular case motivated the creation of the board and the subcommittee, Johnson admitted a 1995 case from Iraq is an example of what will be examined.

Eight U.S. Marines where charged in connection to an incident in Haditha, Iraq, in which 24 Iraqis died.

"The Haditha case would be within the scope of what's described here," Johnson said.

Charges were dropped against six of the Marines, one Marine was acquitted, and last January, nearly seven years after the incident, Staff Sgt. Frank Wuterich entered a plea deal that kept him out of the brig.

The board will also forgo examining cases connected to detention of prisoners in deployed areas. "The review should not encompass allegations of detainee abuse, about which there's been much inquiry and public interest already," Johnson said.

The results of the subcommittee's review are due early next year.