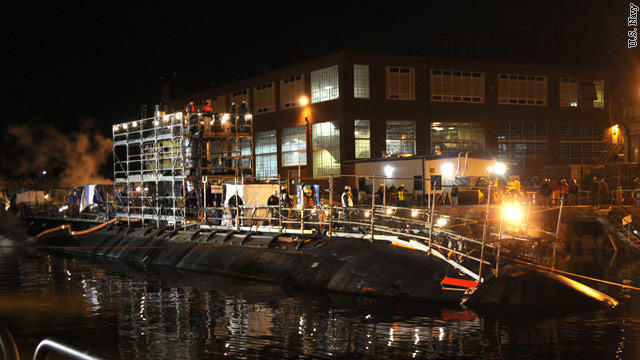 A civilian worker has been arrested and charged in connection with a fire that caused $400 million in damage to a U.S. Navy submarine last May, according to the U.S. Attorney's Office inMaine.

Casey James Fury, 24, was arrested by the Naval Criminal Investigative Service on suspicion of setting the massive blaze and setting a second fire around the submarine last month, according to a criminal complaint from the U.S. District Court of Maine released to the public Monday.

Fury was working inside the USS Miami on May 23 as a painter and sandblaster while the Los Angeles-class attack submarine was in dry dock at the Portsmouth Naval Shipyard in Maine undergoing a massive overhaul.

The affidavit charges Fury with two counts of arson and says that he "willfully and maliciously set fire to and burned a vessel, namely the USS Miami, together with building materials and supplies located thereon."

A Navy news release says the second count will be specific to burned building materials and supplies in and around the USS Miami.

Fury had initially denied involvement in both fires, according to the affidavit, but later confessed. The second fire Fury allegedly started was on June 16 in an area underneath the submarine where he was working. In both cases, he told investigators that he started the fires because he was having extreme anxiety and was trying to get out of work, according to the federal documents.

If convicted of either charge, Fury faces life imprisonment, a fine of up to $250,000 and restitution, according to the U.S. Attorney's Office.

Initial investigations by the Navy found that the fire may have been started by a vacuum cleaner. But the criminal complaint said Fury admitted to setting fire to a pile of rags near a vacuum cleaner in a stateroom in the submarine.

A criminal investigation headed by NCIS began soon after the fire was reported on May 23 and is ongoing, according to the Navy. Other law enforcement agencies, including the Bureau of Alcohol, Tobacco, Firearms and Explosives, are assisting in this investigation, according to a Navy news release.

The Navy has begun planning repairs with the goal of returning the USS Miami to the fleet.

The submarine was commissioned in 1990 and carries a crew of 12 officers and 98 enlisted personnel, according to the Navy.