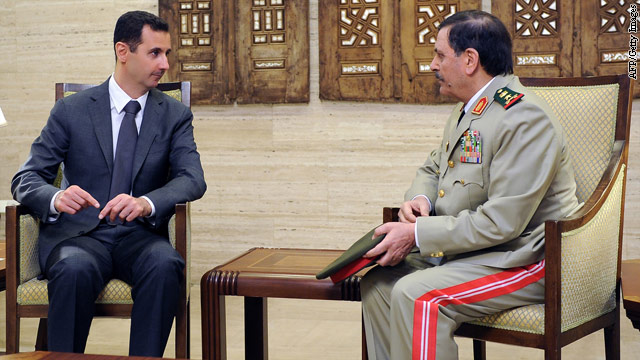 U.S. talking to Israel and others about Syria's chemical weapons

Pentagon officials are talking with their Israeli counterparts to get a sense of what Israel's potential intentions are regarding Syria's chemical weapons, and with others in the Middle East regarding scenarios that could involve those weapons.

Defense Secretary Leon Panetta is scheduled to visit Israel in the coming days and the discussions are expected to continue there, according to the senior official.

The official would speak only on background because the source was discussing sensitive information.

With the Syrian regime having moved chemical weapons at least once in recent days, and no clear sense of Syrian intentions, the U.S. military also has accelerated a series of classified discussions with Jordan, Turkey, the United Kingdom and France.

These talks involve not just the Syrian unrest, but also the potential human and political disaster if al-Assad were to use chemical weapons or the stockpiles were to fall into terrorist or opposition hands because the regime cannot keep them secure, CNN has learned.

Senior U.S. military officials have also directly spoken to their Russian counterparts in recent days about Moscow's need to convince al-Assad to keep the weapons locked up.

"We can't rule out the possibility" that Syria could resort to using chemical weapons, George Little, Pentagon press secretary, said Thursday. The United States has been making the case that Syria would lose its last supporters in Russia and China if such a thing were to happen.

But if the weapon stockpiles had to be secured by outside forces, it would be a very tough military problem, according to several U.S. military officials CNN has contacted.

The challenge breaks down into several parts:

- Intelligence: The United States would need to know the GPS coordinates of all the sites, what materials are there and all the security measures in place. There would need to be a continuous flow of updated intelligence, but it might be limited to satellite imagery, intercepted communications or spies on the ground because the United States is not operating inside Syria.

The sites are widely dispersed across the country and a decision would have to made about whether it's possible to secure them all simultaneously.

- Getting to the sites: If the regime is still in place or even if there is mass confusion on the ground, getting troops to the sites to secure them would be a dangerous military undertaking. An assault by ground forces could lead to extended combat, and an air assault by paratroopers would be extremely risky as well.

The United States would have to first destroy or find a way to control Syria's extensive air defense system of radars and missiles, which are considered highly capable of shooting down aircraft. If the chemical weapons were moving, or ready to be used, all of this would have to be accomplished within a matter of hours.

The United States has an agreement to help Jordanian commandos get to the sites in Syria if ordered, but no one can say precisely how they would get into Syria.

- Who do you send to protect: If there is a need to send U.S. special forces and other conventionally equipped American troops to help secure the sites, the U.S. military would have to quickly find hundreds if not thousands of potential personnel, and ensure they have advanced chemical weapons training in handling and protecting materials. They would also have to provide security for specialized chemical weapons disposal teams that would likely be sent in.

In addition, the U.S. military strongly would want to make this a coalition operation and not undertake it on their own.

- Who do you send to destroy: Sending in aircraft to bomb the weapons sites would require first ensuring the United States controlled the sky over Syria, and that could mean an extended bombing campaign to destroy the air defenses.

But in order to full destroy the weapon sites, or any weapons on the move, the United States would have to be able to virtually incinerate the material instantly because of concerns over vapor or particles dispersing that could hurt civilian populations. That again requires almost perfect intelligence about dozens of sites in order to calculate what bombs should be used, depending on whether the material is above ground or bunkered below ground.

Numerous U.S. officials say they are sending the message to Syria that it's still the regime's responsibility to safeguard the weapons right now, but if the regime suddenly collapses, the situation could become dire very quickly, officials acknowledge.