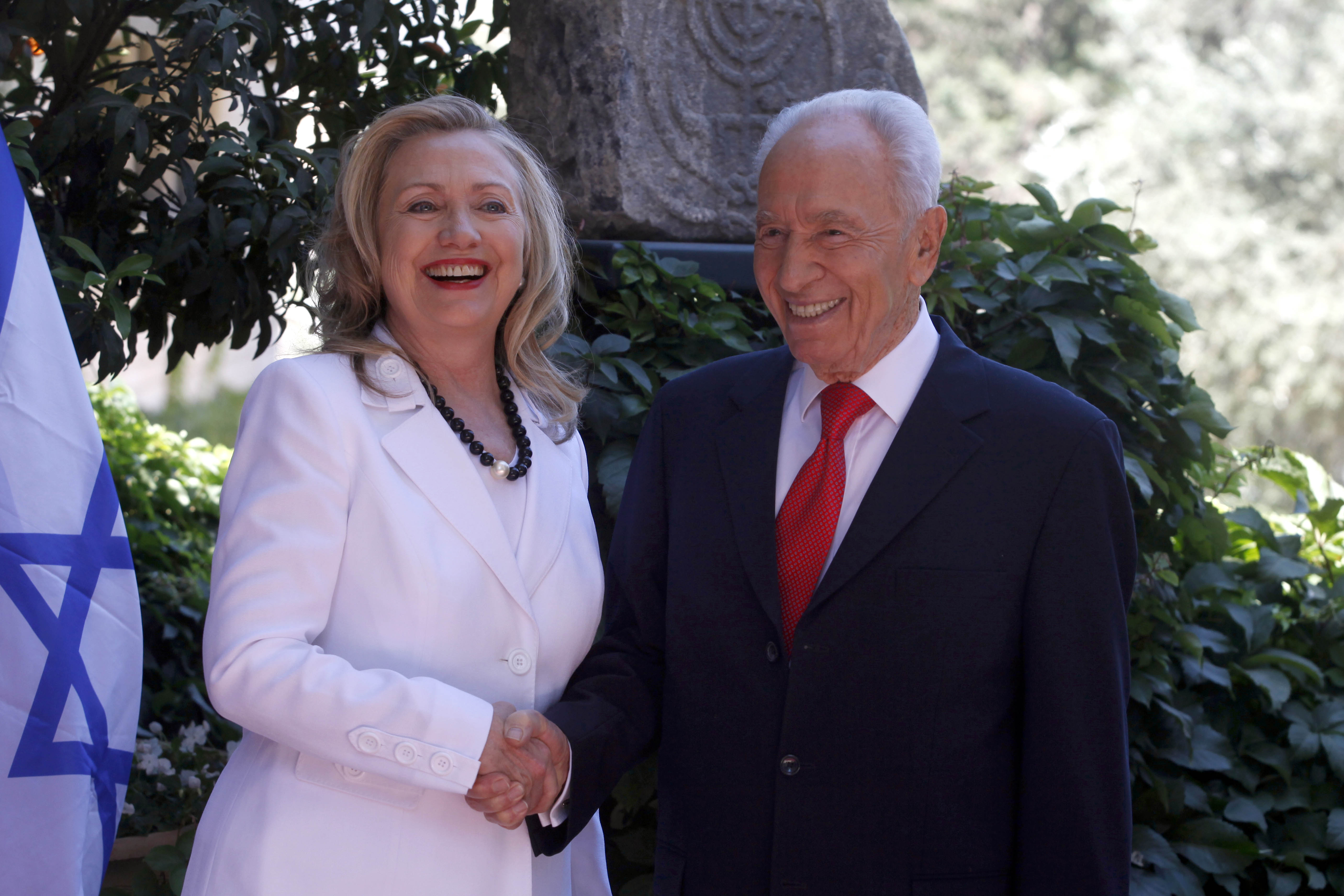 Secretary of State Hillary Clinton said Iran's proposals at recent talks over the country's disputed nuclear program were "non-starters," and called on the international community to increase its pressure on Iran.

"I made very clear that the proposals that we have seen from Iran thus far within the P5+1 negotiations are non-starters," Clinton told reporters at a news conference in Jerusalem following a meeting with Israeli Prime Minister Benjamin Netanyahu. "Despite three rounds of talks, Iran has yet to make a strategic decision to address the international community's concerns and fulfill their obligations under the IAEA and the UN Security Council."

In her remarks, Clinton reaffirmed the goal of achieving a diplomatic solution to a program many western countries fear is a cover for Iran to develop nuclear weapons. Iran maintains its program is purely for peaceful purposes.

END_OF_DOCUMENT_TOKEN_TO_BE_REPLACED

CNN Intelligence Correspondent Suzanne Kelly shows us a new robot that has its sight set on terrorists and criminals. The one pound Recon Scout is a remote controlled robot that can be hurled through window panes and thrown down stairs without breaking. The reconnaissance tool, which is equipped with infrared and audio capabilities, is used by counterterrorism units around the country and by the U.S. military around the world.

Secretary of State Hillary Clinton warned Monday the desert border between Israel and Egypt could become an "operational base" for jihadists if security is not maintained. Israel has raised concerns about the region in the wake of the fall of the Mubarak government.

In an interview with CNN, Clinton said the problem was discussed at length during her meetings in Egypt and Israel.

There is "the potential of jihadists and terrorists taking up an operational base in Sinai," Clinton said in the interview. "We think this is a dangerous situation for both Egypt and Israel. It is also dangerous for Americans. We have Americans who are part of the multinational force that observes the continuation of the monitoring (of the) Camp David Accord. We have Americans in the Sinai. We've had a few concerns about their safety."

END_OF_DOCUMENT_TOKEN_TO_BE_REPLACED

Global banking giant HSBC failed to prevent billions of dollars worth of money transfers that Senate investigators believe were linked to drug cartels and terrorist groups, according to a report released Monday.

The Senate's Permanent Subcommittee on Investigations said London-based HSBC failed to review thousands of suspicious transactions and properly vet counterparties over the past decade.

The subcommittee found that HSBC worked extensively with Saudi Arabia's Al Rajhi Bank, some owners of which have been linked to terrorism financing.  Some evidence suggests the bank's "key founder" was "an early financial benefactor of al Qaeda," the report says.

The report also said HSBC's U.S. affiliate handled nearly 25,000 transactions involving Iran between 2001 and 2007, despite U.S. sanctions against the country.  Other HSBC affiliates making transfers to the U.S. frequently stripped information from the transactions that linked them to Iran in order to evade scrutiny.

Some HSBC executives in the U.S. were aware of this practice as far back as 2001, the report says. An outside review commissioned by HSBC found nearly $20 billion worth of transactions between 2001 and 2007 that may have been subject to U.S. sanctions.

HSBC said in a statement ahead of the hearing that it "takes compliance with the law, wherever it operates, very seriously."

WASHINGTON (CNN) - A U.S. Navy aircraft carrier will head to the Persian Gulf four months earlier than scheduled as part of a Pentagon plan to maintain a beefed-up U.S. military presence in the region, according to Pentagon officials.

The USS John C. Stennis will set sail in September and remain overseas until February 2013. As CNN's Security Clearance first reported last week, the Obama administration and military had been debating whether to keep a second carrier in the region beyond a 2010 mandate that was set to expire in September.

Defense Secretary Leon Panetta approved the deployment at the request of Gen. James Mattis, head of the U.S. Central Command, which oversees U.S. military operations in the Middle East, Pentagon spokesman George Little said Monday. The Stennis had been scheduled to deploy to the Pacific Command area.

The action essentially keeps two aircraft carriers in the region for the next several months. One option that had been before Panetta would have kept two carriers on station until the end of 2013, but he approved the more limited action with the option of reviewing an extension in the spring.

In addition to the Stennis, the USS Mobile Bay will join it, as well as the destroyer Paul Hamilton which will deploy straight to the Gulf instead of spending time in the Pacific region.

Pentagon press secretary George Little said the deployment was not a direct response to the crisis in Syria or rising tensions with Iran.

"This is about a wide range of security interests," he said.

A U.S. military supply ship fired Monday at a small boat in the Persian Gulf after it came too close, apparently killing one person on board, two U.S. officials said.

The USNS Rappahannock, a fuel resupply ship, fired on what the officials called a "small, white pleasure craft" 10 miles from the Dubai port of Jebel Ali.

The small boat appeared to be headed for that port, the officials said, adding that their information was preliminary.  The U.S. ship verbally warned the smaller boat when it was 1,200 yards away and fired at least one warning shot before the decision was made to fire shots to disable the boat, the officials said. END_OF_DOCUMENT_TOKEN_TO_BE_REPLACED

British government ministers fought back Sunday against accusations they had taken their eye off the Olympic security ball, rejecting accusations they were warned nearly a year ago about the security giant contracted to provide guards for the Games.

G4S, the security contractor, admitted on Wednesday that it would not be able to provide more than 10,000 security staffers by the time the Olympics begin in less than two weeks.

The government hurriedly announced it would bring in 3,500 military personnel to boost security for the Games.

Since the start of the uprising in Syria there has been great concern about al Qaeda in Iraq infiltrating the Syrian opposition groups to unseat the Syrian government. Though not considered present in large numbers, it is one reason cited by U.S. officials for resistance to arming Syrian rebels.  The Syrian government

But for Syria's leadership, al Qaeda's work against the Bashar al-Assad regime is a boomerang.  In an interview with CNN's Ivan Watson, the highest level government official to defect described further how Damascus has collaborated with al Qaeda since the U.S. invasion of Iraq.  Former Syrian ambassador to Iraq Nawaf al Fares said Syria "coordinated" with al Qaeda because they were threatened by the U.S. invasion: END_OF_DOCUMENT_TOKEN_TO_BE_REPLACED

A member of the Free Syrian Army walks past a destroyed Syrian forces tank in the town of Atareb in northern Aleppo province.
July 16th, 2012
10:14 AM ET

The International Committee of the Red Cross officially describes the situation as a "non-international armed conflict" and does not use the term "civil war."

But spokesman Alexis Heeb said the group's legal term "appears in the Geneva Conventions to describe a civil war."

"What is new is the fact that in April ... we referred to three specific locations" of internal conflict, Heeb said. Now the ICRC says the internal strife is evident in other areas.

Two recent in-flight emergencies involving troubled oxygen systems in the F-22 "Raptor" are unrelated to other, more worrisome breathing problems pilots have experienced for more than a year when flying the plane, according to U.S. Air Force officials.

The Air Force has been investigating why a number of F-22 pilots have experienced a mysterious loss of oxygen while in the air, causing dizziness and confusion known as hypoxia, since spring 2011.

But two recent incidents related to the F-22 oxygen system are considered regular mechanical issues not connected to the oxygen deprivation investigation, according to Air Force Lt. Col. Tadd Sholtis, a spokesman for the Air Force's Air Combat Command.