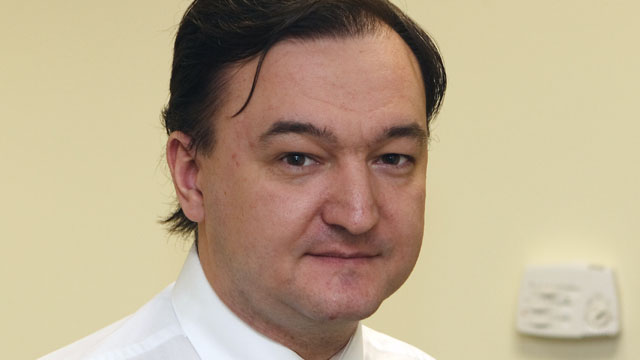 A delegation of Russian senators is in Washington this week in a last-ditch lobbying attempt to persuade their fellow legislators not to pass a bill that would ban Russian officials who violate human rights from visiting the United States and freeze their assets.

The legislation, dubbed the Magnitsky Bill, was named in honor of Sergei Magnitsky, a Russian lawyer working for a major investment company in Moscow, Hermitage Capital Management, who was arrested and died in jail.

Even as the bill moves closer to passage, the Russian legislators, in a news conference at the Russian Embassy, called it political and warned the bill would damage relations between the two countries "for years to come."

The four senators handed out briefing-book-thick copies of the results of a preliminary parliamentary investigation into the company for which Magnitsky worked and into the circumstances of his November 2009 death.

Inside were photocopies of documents as well as a translation of the forensic medical examination report describing the injuries Magnitsky suffered before his death.

Vitaly Malkin, a member of the Senate Committee on International Affairs of the Federation Council, told reporters, "We do acknowledge that at the last stage of his detention in Russia, adequate medical assistance was not provided to Mr. Magnitsky," but Malkin added "We think that it was not done intentionally."

But Malkin also noted that Magnitsky, in his view, was arrested "absolutely legally" since, for many years, he said, Magnitsky provided assistance to the head of Hermitage Capital, William Browder, and was involved in "illegal activities," including fraud and tax evasion.

The Russian senators said, as a result of their investigation, they also have some doubts about the honesty of Russian tax authorities. "We are ready, and we would welcome any international legal assistance, including the assistance of U.S. law enforcement authorities," Malkin said, "in finding out where did this money go, because $230 million was stolen from the Russian budget and we simply do not know where did it go."

The original draft of the Magnitsky Bill targeted Russia but U.S. lawmakers in the Senate have broadened the wording to include human rights violators from around the world.

The bill is being considered even as Congress is preparing to end the Cold War-era Jackson-Vanik amendment that enforced economic sanctions on Russia for not allowing Soviet Jews to emigrate. With the collapse of the Soviet Union that no longer was an issue but legislators kept the amendment on the books in order to pressure Russia on other issues.

The Russian delegation is meeting with members of Congress, the Obama administration and the State Department to make its case. They expressed some hope their colleagues would be convinced by their report but, when asked what the reaction has been so far, they said they're being asked "Why did you come so late?"