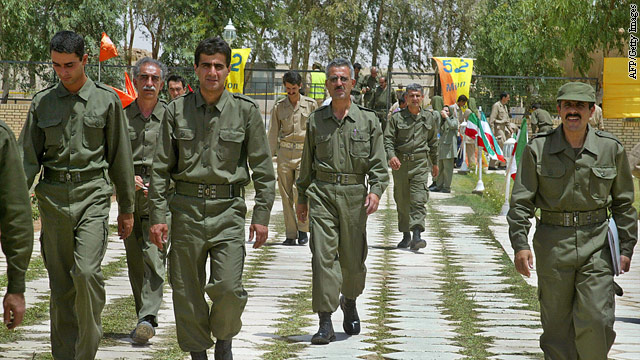 Benjamin told reporters that the MEK appears to believe, mistakenly, that Clinton's only option is to delist the group. He said Clinton, according to the judges' order, must make her decision by October 1 but the order "did not mandate any particular result."

"The secretary of state," he said, "is within her rights in either listing, relisting or delisting. And that really is the bottom line here, and no one should be unclear about that in any way."

Trying to "wait it out," he warned would be "irresponsible and dangerous."

Cooperating and leaving Camp Ashraf, he said, would be a strong indication that the MEK "have left their violent past behind."

Ambassador Daniel Fried, special advisor to the secretary on Camp Ashraf, who also spoke with reporters, said that "it is imperative that progress be made swiftly," but added, "the situation remains precarious."

Fried described what he called "constantly shifting demands" by the MEK. Two thousand of the approximately 3,000 MEK members and their families have been relocated from the former military base, Camp Ashraf, to temporary quarters at another camp. Ultimately, the plan is for them to move from there to other countries. Twelve hundred to 1,300 remain at Camp Ashraf and are refusing to leave.

A Paris-based spokesman for the MEK took issue with the comments by the State Department officials. Shahin Gobadi, of the National Council of Resistance of Iran, told CNN the designation of the MEK as a terrorist organization “was political in nature and was designed to appease the religious dictatorship ruling Iran.”

“If the Secretary had any evidence, why has she taken 600 days without a decision?” he asked.

Gobadi listed 10 demands by the remaining residents of Camp Ashraf, including the transport of trucks, forklifts, generators and vehicles, adding “none is a luxury. It is inhumane that instead of supporting these minimums, someone would want to reject them.”

The spokesman said as soon as the 10 items are provided “all residents will relocate to Liberty.”

In the past, the Iraqi government has extended its deadline for the MEK to leave Camp Ashraf when there had been significant progress toward a deal. Fried said the United States hopes that there will be progress this time as well. The U.S. Embassy in Iraq, the State Department and the United Nations, he said, are "working hard to address as many legitimate concerns as we can."

Fried cited a demand for more air conditioning as one of the demands that appears reasonable. But a demand for private cars, he said, "strikes me as not central" to humanitarian concerns.

The Iraqi government, he said, has reaffirmed "that it wants a peaceful solution. We welcome that," he told reporters. Five convoys have successfully left the camp and, he said, "it is absolutely critical that the MEK allow the convoys to resume."