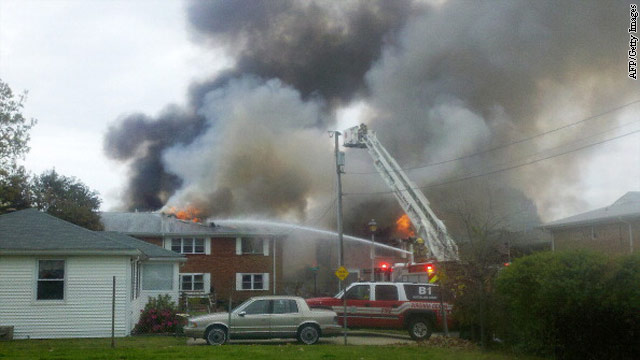 Firefighters douse an apartment complex when a US Navy F-18 jet fighter crashed after take-off on April 6, 2012 in the tourist resort of Virginia Beach, Virginia.
July 2nd, 2012
05:12 PM ET

A Navy F-18 fighter jet that crashed into a Virginia Beach neighborhood in April experienced dual engine failure, marking the first time an F-18 has had two unrelated catastrophic engine failures at the same time, according to a report released on the investigation.

In the first five seconds of flight, the jet's right engine stalled from a fuel leak, the investigators said. The pilot tried to compensate with extra thrust from the left engine but it also failed due to an unrelated problem with the afterburner.

"It was not a single failure but an extremely unusual and complex multisystem emergency," Rear Adm. Ted Branch said at a press conference Monday.

With a failed right engine and a malfunctioning left engine that was not generating sufficient thrust, the aircraft quickly lost altitude. When the F-18 dropped to 50 feet the crew ejected.

One second later the jet crashed into an apartment complex, but no one was killed. The whole ordeal, from takeoff to crash, lasted only 70 seconds.

If the right engine alone had failed, it is highly unlikely the aircraft would have crashed, Branch said.

"We have never had this kind of unrelated dual engine mishap in the F-18," he said. "It's the first time its ever happened with this aircraft."

Emergency procedures will be revised to take this rare occurrence into account, he said.