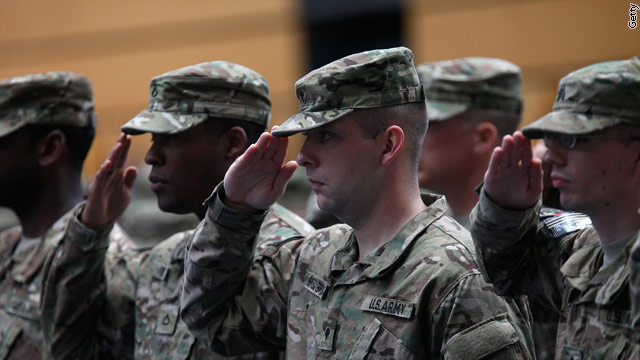 As Americans celebrated Fathers Day, few were likely aware that close to 2 million children have at least one parent who serves in the armed forces. Forty-three percent of American troops are parents, most of them fathers.

While many acknowledge the sacrifices made by our servicemen, women, and their families, our appreciation for the significance of these sacrifices has deepened as we’ve heard the voices of military dads. Like this one:

“I’m away so much, whether it’s just, you know, active duty here in the States or being deployed again. I think the biggest impact is he senses that, ‘OK, well, Dad’s here for a little bit and then he’s gone and then he’s here’… I hope to have a really good relationship with my child, you know. I didn’t have a great father figure when I grew up and I wanna kinda correct that and be a father figure for my child… I feel kinda like a papa bear, you know, protective…”

All parents want to protect their children from harm and keep them safe. Military parents have a dual commitment, to protect their children and protect our nation. So Father’s Day is an opportunity to call attention to the special challenge of balancing military and family life, and to honor those who both strive to be good fathers across a great distance during deployment, and those who remain as primary caregivers when their spouses/partners deploy.

It’s also an opportunity to remember the hard work of fathering after deployment, when eagerly anticipated reunion brings both joy and challenges, including reintegrating the service member or veteran back into the family unit, reestablishing roles and routines, and the potentially necessary adjustment to combat-related injuries (both visible and invisible).

“He was born and I was deployed before he was walking. And when I came back, he was standing, gripping onto (his mother’s) leg –- looking at me like, ‘That’s who?’ She had to tell him, ‘That’s Daddy.’”

As researchers from both civilian and active duty backgrounds, we work to understand resilience in the face of challenge. What we find is that individual resilience depends on a context of relationships. Strong relationships among service members in their units – and strong connections with friends, extended family, teachers, co-workers, and others in the broader community, for family members who stay behind – provide the support needed to bear the burden of separation and worry.

The need for support and a strong community continues during the period of reintegration after the service member returns.

A core challenge many military parents face is the need to reconnect with a child who has undergone significant developmental changes while they were away – the daughter who transitions from school-age to “tween,” the infant who now walks and talks and doesn’t recognize his father, the teenage son who has a hard time adjusting to someone new setting rules at home.

Healing and repair occur through day-to-day moments when family members respond to one another’s need for connection, nurture, and support: picking up the young child when he cries, playing ball together, laughing and sharing joy, and supporting one another when feelings are hard.

These everyday interactions build and strengthen relationships, enhancing both individual and family resilience.

With no more Iraq deployments on the horizon and a dwindling number headed to Afghanistan, stories about the military and our veterans may begin to fade from the front pages; yet the effects of deployment will endure far into the future.

While acknowledging the need for enhanced, long-term support for military families, we simultaneously recognize what military families have to offer. Military families know a great deal about confronting challenges and transitions, the work it takes to maintain relationships, and the importance of savoring time with those we love. These hard-earned lessons in coping and resilience are instructive for all of us, military and civilians alike.

As individuals, as families, as communities, and as a nation, we all stand to draw strength from respectful, reciprocal relationships that bridge the civilian-military divide.

Tova Neugut is a Doris Duke Fellow for the Prevention of Child Maltreatment and a Ph.D. candidate in social work and psychology at the University of Michigan, where she is involved in intervention and research projects to support families connected with the National Guard and United States Air Force.

Kate Rosenblum, Ph.D., is a clinical developmental psychologist and clinical associate professor affiliated with the University of Michigan's Military Support Programs and Networks, where she leads the STRoNG Families initiative providing support to military families with young children.

Mike Erwin is a major in the U.S. Army, has deployed three times to Iraq and Afghanistan, and teaches at the U.S. Military Academy at West Point. He is the founder of Team Red, White & Blue, a veterans' support organization.