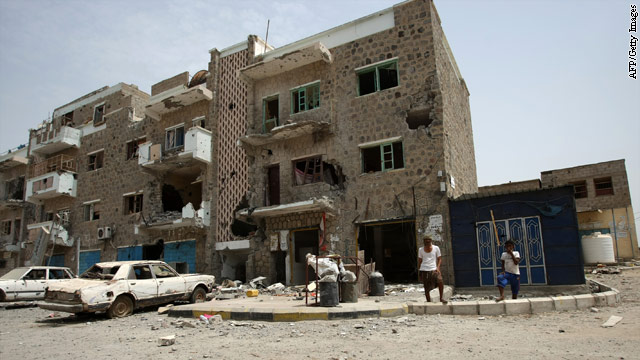 On Somalia, the president stated, "In a limited number of cases, the U.S. military has taken direct action in Somalia against members of al Qaeda, including those who are also members of al-Shabaab, who are engaged in efforts to carry out terrorist attacks against the United States and our interests."
END_OF_DOCUMENT_TOKEN_TO_BE_REPLACED

US believes Russia has ship with weapons, troops en route to Syria

By Barbara Starr, with reporting from Jill Dougherty

The United States says it is tracking a Russian military cargo ship as it makes its way to Syria carrying weapons, ammunition and a small number of Russian troops.

U.S. intelligence believes the Russians are sending the ship to help fortify its naval base in Syria as the situation in country continues to spiral out of control, Pentagon officials told CNN Friday.

The presence of the ship was first reporting by NBC News.
END_OF_DOCUMENT_TOKEN_TO_BE_REPLACED

The wife of Brett McGurk, the president's pick to be ambassador to Iraq, whose nomination is in jeopardy following recent revelations of questionable conduct, said Friday she feels "targeted" over recent reports that led to her resignation as a reporter for the Wall Street Journal.

"I've never felt so vulnerable, so targeted and so exposed as I have in the last two weeks," Gina Chon wrote in an email to friends, obtained by CNN. "I feel like I have become collateral damage in this process."

McGurk, who served in the administrations of  President Barack Obama and former President George W. Bush, has come under scrutiny since salacious emails with Chon were made public, revealing the two carried on an affair while they were stationed in Baghdad in 2008. They later married, but the emails and ensuing revelations led to Chon's resignation from her post Tuesday at the Journal and Senate leaders have indicated they may delay a vote on McGurk's confirmation.

Pilots flying the F-22 Raptor reported illness from oxygen deprivation incidents 10 times as often as pilots of other fighter jets, according to Air Force data.

The F-22 has been the focus of an Air Force inquiry because of the oxygen problems.

The new data, released by Sen. Mark Warner, D-Virginia, and Rep. Adam Kinzinger, R-Illinois, shows Raptor pilots have reported 26.43 hypoxia and hypoxia-like incidents per 100,000 flight hours. While that represents a mere fraction of total flight hours, it is far higher than incidents from other Air Force aircraft, including the A-10, the F-15E and the F-16.

Kinzinger, a military pilot himself, said that while low, the numbers are extremely concerning. Kinzinger and Warner have been vocal in pressing the Air Force to investigate the concerns after two pilots came forward about the problem on CBS's "60 Minutes." END_OF_DOCUMENT_TOKEN_TO_BE_REPLACED

Afghanistan war funding could be in jeopardy if proposed severe budget cuts hit the military in the beginning of 2013, according to senior Pentagon officials.

Senior leaders at the Pentagon are becoming increasingly concerned as it becomes clear that the $500 million in additional budget cuts possibly hitting the Pentagon in January, known as sequestration, also includes the Overseas Contingency Operations (OCO) which is the Pentagon's war budget.

The potential cuts are the result of a congressional deal struck last fall while negotiating over the current budget deal. Those negotiations resulted in the inability of Congress and the president to agree on a deficit-reduction plan. If there is no agreement, come the beginning of January 2013, the Pentagon will be forced to cut an additional $500 billion from its accounts over the next 10 years.

END_OF_DOCUMENT_TOKEN_TO_BE_REPLACED

Tehran and the so-called P5 Plus One - the United States, China, Russia, Germany, France and Britain - agreed to hold five rounds of talks aimed at persuading Iran to curb its nuclear program, because of suspicions that the program aims to produce weapons. END_OF_DOCUMENT_TOKEN_TO_BE_REPLACED