END_OF_DOCUMENT_TOKEN_TO_BE_REPLACED

According to Pentagon figures, 169 foreign men are still at the Guantanamo facility, including five "high-value" suspected terrorists from the 9/11 attacks set to go on military trial.
END_OF_DOCUMENT_TOKEN_TO_BE_REPLACED

The U.S. is withdrawing its negotiating team from Pakistan because after several weeks, the two sides have failed to reach an agreement on re-opening land routes from Pakistan into Afghanistan that have been used to carry supplies for the war.

"We have not reached resolution," said George Little, Pentagon press secretary. He noted that some of the team left Pakistan over the weekend, and others are expected to leave shortly. "We expect others to leave soon unless circumstances change."

The group had been in Pakistan for about six weeks, according to Little.

Little would not say whether the decision to leave came before or after Defense Secretary Leon Panetta's remarks last week that the U.S. was running out of patience with Pakistan's safe havens for terrorists including the Haqqani network. END_OF_DOCUMENT_TOKEN_TO_BE_REPLACED 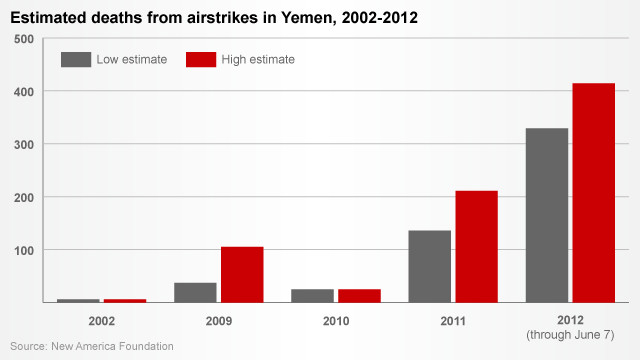 Ramping up the covert war in Yemen

CNN national security analyst Peter Bergen breaks down the numbers behind the ramped up covert war in Yemen and says that it is a strategy that the Obama administration could very well increase in use beyond what has already been done.

Bergen notes in his article on CNN's Opinion page that the changes comes because al Qaeda's Yemen-based affiliate, al Qaeda in the Arabian Peninsula (AQAP), has over the past three years attempted a number of terrorist attacks against the United States, launching it from relative obscurity to the top of the U.S. government's list of national security threats.

The Obama administration has launched an estimated 28 drone strikes and 13 air strikes in Yemen, according to data compiled by the New America Foundation from reliable news reports. By contrast, the administration of George W. Bush only launched one drone attack in Yemen.

Obama has ramped up even more, Bergen notes, with the depature of Yemeni president Ali Abdullah Saleh who stepped down in February. Since then, the American drone strikes and airstrikes have increased. In just three months, the United States launched an estimated 20 strikes. By comparison, there were just 18 attacks in the previous two years.

Al Qaeda's Yemeni affiliate has posted several messages on jihadist forums in a recruitment campaign directed at supporters already living in the West.

It's a further sign of what has been a consistent campaign by what U.S. officials believe is at the moment the most ambitious and threatening element of al Qaeda, to communicate and influence potential empathizers residing in the West.

One such message - in Arabic - was posted by a user indentifying itself as the military committee of al Qaeda in the Arabian Peninsula (AQAP) on the Shumukh and Al-Fidaa jihadist forums, according to Flashpoint Global Partners, which monitors jihadist web content.

"Corresponding with those who yearn for martyrdom operations and the brothers who are searching to execute an operation that would cause great damage to the enemies the goal now is to activate those brothers who reside in the land of the enemy ... whether Jewish, Christian or apostates as clearly individual jihad or the so-called lone wolf has become popular," the posting stated.

END_OF_DOCUMENT_TOKEN_TO_BE_REPLACED

Syria: Putting the cart before the horse?

While Syrians are dying in horrendous attacks, it seems strange to hear diplomats talking about a "political transition" - a solution that, at this stage, seems like a pipe dream.

Secretary of State Hillary Clinton already is describing that transition in detail. To achieve this, she explained last Thursday in Istanbul, there must be a "real cease-fire."

"Second, (Syrian President Bashar al-Assad) must transfer power and depart Syria. Third, an interim representative government must be established through negotiation," Clinton said in remarks after meeting with Turkey's foreign minister in Istanbul. "The transition phase must lead to a democratic, representative, and inclusive government. There must be civilian control of the military and security forces and respect for the rule of law and equality before the law for all Syrians."

Isn't that putting the cart before the horse?