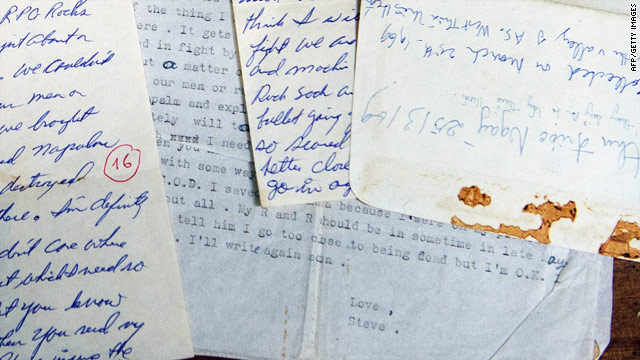 Decades after war, US and Vietnam swap slain troops' papers

Nearly four decades after the end of the Vietnam War, the United States and Vietnam exchanged personal papers taken from the dead bodies of each others' troops for the first time, the Pentagon announced Monday.

On a historic visit to Hanoi, U.S. Defense Secretary Leon Panetta handed over a diary taken by a U.S. Marine from the body of Vietnamese soldier Vu Dinh Doan in 1966.

Background Information on the Artifacts

In March 1969, U.S. Army Sergeant Steve Flaherty of Columbia, South Carolina was killed in action in northern South Vietnam while assigned to the 101st Airborne Division. Vietnamese forces took Flaherty's letters and used excerpts for propaganda broadcasts during the war. At that time, Vietnamese Senior Colonel Nguyen Phu Dat retained the letters and following the war, contemplated how to return them to Flaherty's family. Decades later, Phu Dat referenced the letters in an August 2011 Vietnamese online publication about documents kept from the war years.

Now that Secretary Panetta has received the letters from the Vietnamese government, the Office of the Secretary of Defense will work with the United States Army Casualty office to present the letters to the surviving family.

In March 1966, 1st platoon, Bravo Company, 1st Battalion, 7th Marines, was engaged in a firefight near Quang Ngai during Operation Indiana. Following the battle, Robert "Ira" Frazure of Walla Walla Washington saw a small red diary on the chest of Vu Ðình Ðoàn, a Vietnamese soldier who was found killed in a machine gun pit. Frazure took the diary and brought it back to the United States. In November 1966, Frazure was discharged from the Marine Corps following three years of service.

Also in March 1966, a friend of Frazure, Gary E. Scooter was killed in action during Operation Utah. Decades later, Frazure was introduced to Scooter's sister Marge who was conducting research for a book about Scooter's life and service in the Marine Corps. Frazure asked Marge for her help to return the diary to the family of Vu Ðình Ðoàn. In February 2012, Marge Scooter brought the diary to the PBS television program History Detectives to research and find the Vu Ðình Ðoàn family. Last month, after finding the family, History Detectives asked the Department of State and the Department of Defense to help return the diary to the Vietnamese government so it can be returned to the Vu Ðình Ðoàn family.