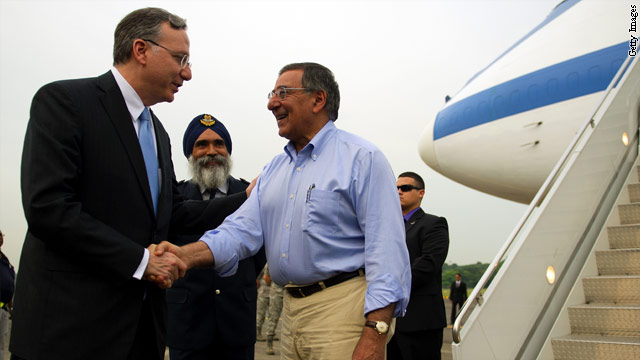 "There is no question that we are very concerned about the atrocities that are taking place in Syria," Panetta said. "... This is an intolerable situation. We cannot be satisfied with what's going on and the international community has got to take further steps to make sure that Assad steps down."

For the United States, he said, additional steps means "to continue to put pressure on Russia to do what it can to achieve that goal. It means continuing to explore every other possible option here to try to continue the effort to get Assad to step down."

Panetta echoed earlier comments he and others in the Obama administration have made that the international community must work together to pressure the Syrian leadership to step down.

Asked if other countries in the region could be dragged into the Syrian conflict if the fighting drags on, starting a sectarian proxy war, Panetta said he has some concerns.

"There are countries like Iran and others (that) are already involved that are trying to assist Assad and there are other groups, both good and bad, that are engaged," he said.

"The longer this goes on, the greater the threat the situation is going to get worse in terms of what happens ultimately when Assad steps down. I think the key right now is to have an effective transition and doing it in a way that continues to provide stability for Syria."