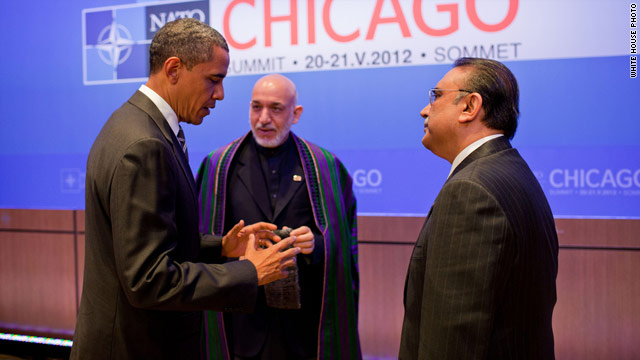 Pakistan's president Asif Ali Zardari was surely feeling some pressure.   Even a normally bland NATO document took note of thanking Central Asian countries and Russia for aiding in transporting supplies, while urging Pakistan to "reopen the ground lines of communication as soon as possible."

The White House insisted there would be no meeting between President Obama and Pakistan's president, though the two did talk briefly twice on Monday.  In what the White House described as "brief on-on-one conversation," the two talked as they entered the meeting in the morning.  Later Obama, Zardari and Afghanistan's President Hamid Karzai spoke before a group photo session.

The three leaders spoke about "their shared commitment to an Afghan-led reconciliation process to bring the war to a responsible end," according to the White House.  Later, at a press conference, President Obama said he never expected the issue to be resolved at the summit but there was "diligent progress" towards getting the supply routes reopened.

Pakistan closed the ground routes after a NATO airstrike in November killed two dozen of its soldiers. NATO insists the incident was an accident. Obama offered his condolences but refused to apologize.

The United States and Pakistan have not come to an agreement on the price of opening the supply lines, according to senior administration officials, who spoke on condition of anonymity because of the sensitivity of the issue.

Leave a Reply to jr