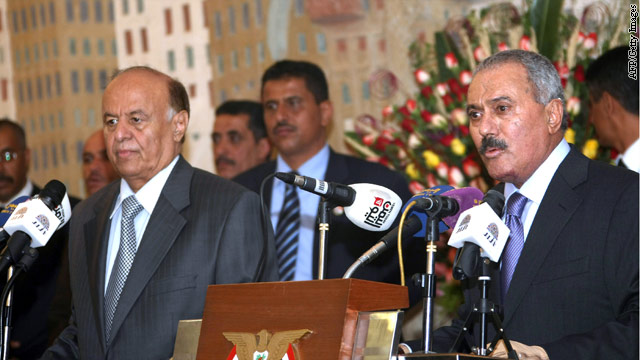 Former Yemeni leader thought to be target of Obama action

The Obama administration Wednesday fired a major shot across the bow of former Yemeni President Ali Abdullah Saleh, his family and cronies, warning them not to interfere with the transition agreement that helped remove Saleh from office.

President Barack Obama issued an executive order targeting "those who threaten the peace, security, or stability of Yemen," including by obstructing implementation of the transition agreement.

The new order allows the Treasury Department to freeze U.S.-based assets of anyone who might subsequently be listed under the order. While no specific entity was named, it is widely believed to be aimed at the former president's circle.

At the State Department, spokeswoman Victoria Nuland refused to cite Saleh by name but said the order was "definitely" meant to "send a message to those who are trying to block transition that we have this tool to use against them, and that they should think again about the policies that they are pursuing."

But Bruce Riedel, former CIA analyst and presidential adviser now with the Brookings Institution, told CNN that Saleh "and his immediate family are precisely the target of this executive order, and the message is 'You need to get out of Dodge - or physically get out of Sanaa.'"

Last November Saleh, after 30 years in power, accepted an agreement between the government of Yemen and the opposition that provided for a peaceful transition of power to his then-vice president, Abed Rabbo Hadi. But, for more than a year, Saleh exasperated the United States, initially resisting demands that he step down, and then refusing to move out of the presidential office after agreeing to do it.

As an inducement the Obama administration allowed him to come to the U.S. for medical treatment for injuries suffered during armed attacks.

But Saleh still is using his family to intimidate the political process in the capital, Bruce Riedel told CNN. President Hadi last month ordered Saleh's hangers-on to leave, but Riedel said, just a few days ago, he spoke with a source in Sanaa who said Saleh's son, surrounded by armed forces, looks down on the city from the surrounding hills, their tanks focused on the presidential palace "with the message 'Don't think you can ignore me, I'm still a player, be nice to my Daddy.'"

A senior administration official says "At this stage, the first signal that we're sending is that we've given ourselves new authority. Whether that has a chastening effect on individuals remains to be seen."

Yemen's political instability is taking a toll on the country, an important partner for the U.S. in fighting al Qaeda in the Arabian Peninsula. Just last week the administration confirmed that the CIA had broken up a plot by AQAP to blow up a airplane en route to the United States.

Saleh's "obstructionism" is preventing the central government from establishing control over other parts of the fractured country, Riedel says, including the north which is in a state of rebellion and the south where al Qaeda operates. Yemen, he says, is like Humpty Dumpty: "We're tying to put something back together again which may be broken beyond repair."