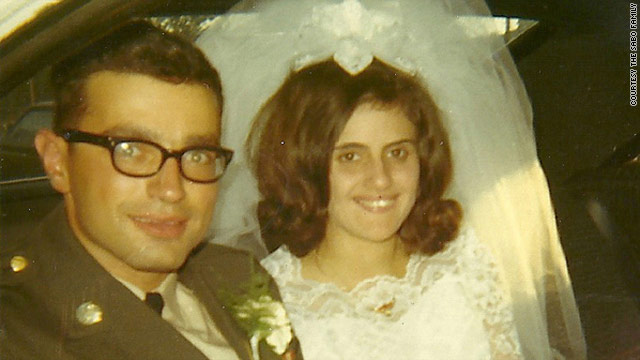 "We only had that one month together as a married couple," she told CNN. "He left for Vietnam and I never saw him again."

About seven months after the wedding, two soldiers knocked on her door to say he was missing in action.

"They came back to me five days later and told me that he was killed in action by enemy fire and that was it, that's all I knew for 32 years."

There was a lot more to know, and now the nation is honoring what he did those decades ago. Wednesday, President Barack Obama will award Spec. Leslie Sabo Jr. the Medal of Honor.

Brown said her husband was fun-loving. "The Leslie I knew was always goofing around, having fun. We had a ball together, my family adored him. Oh, my gosh, my mother keeps saying you couldn't have found anybody better than him to marry my daughter."

The people he fought with in the 101st Airborne Division told Rose that he knew when to put aside the goofing and focus on fighting.

"When he was over there, he wore a red bandana. And (his fellow soldiers) said when he put that red bandana around his forehead, he meant business. He was a soldier. And they have a picture of him with that red bandana on and the title of it is 'The Soldier.'"

The Soldier's last stand is documented by the Army.

"Even though his platoon was ambushed from all sides by a large enemy force, Sabo charged the enemy position, killing several enemy Soldiers. He then assaulted an enemy flanking force, successfully drawing their fire away from friendly Soldiers and ultimately forcing the enemy to retreat. While securing a re-supply of ammunition, an enemy grenade landed nearby. Specialist Sabo picked it up, threw it, and shielded a wounded comrade with his own body – absorbing the brunt of the blast and saving his comrade's life.

Although wounded by the grenade blast, Sabo continued to charge the enemy's bunker. After receiving several serious wounds from automatic weapons fire, he crawled toward the enemy emplacement and, when in position, threw a grenade into the bunker. The resulting explosion silenced the enemy fire, but also ended Specialist Sabo's life."

When Obama presents Brown with the medal on the pale blue ribbon, it will complete a circle that began 42 years ago, right after Sabo's death. His unit had recommended him for the Medal of Honor, but somehow it didn't happen. A researcher discovered files about Sabo and now the earlier oversight has been corrected.

For now, Rose Mary Sabo Brown is focused on her late husband and the medal he earned more than four decades ago.

"I've never stopped thinking about him," she said. "My heart is filled with pride, that you can't even imagine. It will be an honor to share this with anyone who wants to see it."

Leave a Reply to Tonette Boddorf