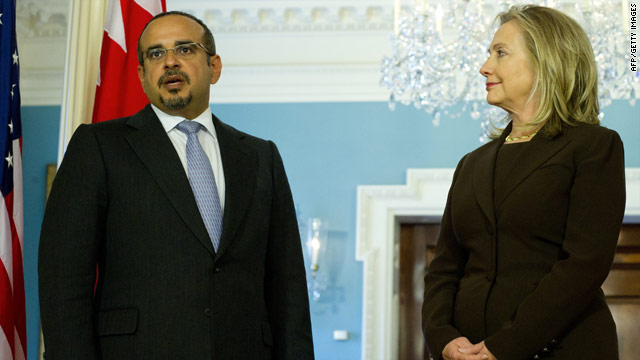 The United States and Bahrain signed a defense pact in 1991. Bahrain is home to the U.S. Fifth Fleet and is viewed as an important bulwark against Iran's influence in the Persian Gulf.

Two U.S. officials, who spoke to CNN on the condition of anonymity, said the weapons being sold, including air-to-air missiles, are designed to offer interoperability between the two countries' militaries.

Nuland said the items being released by the United States "are not used for crowd control," and that the United States is maintaining holds on TOW missiles and Humvees that Congress was told about last October, as well as additional items for the Bahrain Defense Force and Ministry of the Interior. Equipment for Coast Guard and units deployed in Afghanistan are exempted, she said.

"We have made the decision to release additional items to Bahrain mindful of the fact that there are a number of serious unresolved human rights issues that the government of Bahrain needs to address," she said, adding that the United States remains concerned about "excessive use of force and tear gas by police."

The United States also remains concerns about almost daily use of violence by protestors, Nuland said. She urged all sides to refrain from incitement.

After lifting a state of emergency imposed during the protests, the Bahraini government appointed a Commission of Inquiry, which issued a report on the government's handling of the crisis, including recommendations for reform.

Earlier this week, Secretary of State Hillary Clinton met with Bahrain's Crown Prince Salman bin Hamad bin Isa Al Khalifa and released a statement noting that while the government has taken some steps to implement the recommendations, "much work" remains to fully respond to human rights issues. She urged Bahrain to adopt a meaningful process of institutional and political reform.

Some lawmakers and human rights groups have opposed the sale of U.S.-made weapons to Bahrain, fearing they would be used against protestors. Sen. Patrick Leahy, D-Vermont, chairman of the Senate Appropriations subcommittee responsible for the State Department budget, wrote conditions placed on such items, such as tear gas, into the last year's budget bill for foreign operations.

While not commenting on Friday's announcement, Leahy's spokesman, David Carle said that despite Bahrain's stated commitment to reforms, the senator continues to have concerns that Bahrain "has not been as active as it needs to be" in investigating cases of abuse against protestors by security forces.