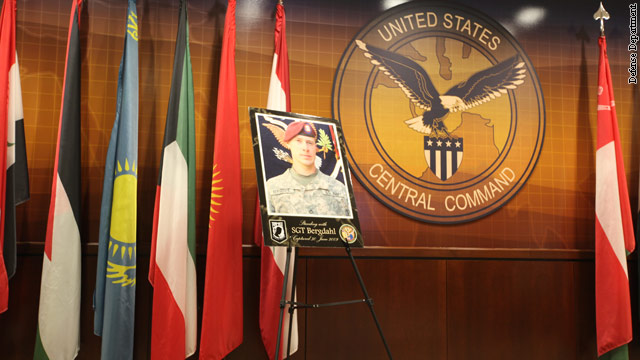 Bergdahl's parents said this week that the U.S. had been negotiating with the Taliban to exchange their son for five detainees at Guantanamo.  It was the first public admission of the fact their son was part of the negotiation.  The POW's parents gave the interview in part because of frustration about the lack of progress in freeing their son.Asked about how much focus the U.S. military has given searching for Bergdahl, Dempsey cited the poster as an example that the POW is not forgotten.  Here is what he said:

"Yes, I've had the Bergdahls in my office. I've corresponded with them several times. I've - I understand their concerns. And I can assure you that we are doing everything in our power, using our intelligence resources across the government, to try to find, locate him, and that - I mean, I'll give you one vignette. If you go to the CENTCOM command center, where, you know, their conference room, there's about a four-by-six-foot poster of Bowe Bergdahl sitting in front of the podium to remind them, and therefore us, every day that he remains missing in action. I can assure you of that."

Leave a Reply to Charles