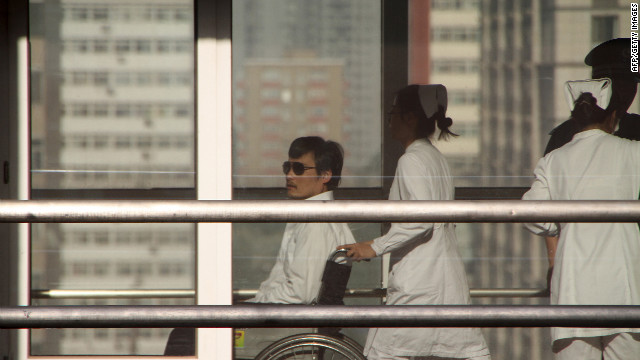 Guo says he mainly talked with Chen about the "dramatic change of his attitude reported by the media yesterday and today."

Chen, he says, "was very surprised and felt extremely sorry for the pressure brought to the relevant parties, including the U.S. Embassy."

"(Chen) never said to the media that he wanted political asylum," he says. “He only said he wanted to go to theU.S.to rest for a few months. He has a letter of invitation from the New York University, and he is a free person. He wants to go to the U.S. for travel for a while and then come back. Therefore, this is not a change of mind."

In a previous interview with CNN, Chen said embassy officials "kept lobbying me to leave" and said he was "disappointed" in the U.S. government.

But Guo says Chen told him he "never directly or indirectly criticized the U.S. Embassy nor did he say he was "forced" to leave.

"He walked out of the embassy on his own free will," Guo says.

Chen "is grateful to the U.S. Embassy for the help in the past week. He is grateful to Secretary (Hillary) Clinton, Ambassador Gary Locke and other diplomats who have helped him. He never directly or indirectly cast any blame."

Guo says in the first day in the hospital, "some unpleasant things happened" that made Chen and his family "anxious and nervous," especially a threat to his wife from some officials from their village.

Chen hopes, he said, that "under massive attention from global public opinion, the Chinese government can abide by the law and deal properly with Shandong local officials' illegal persecution on him and his family."