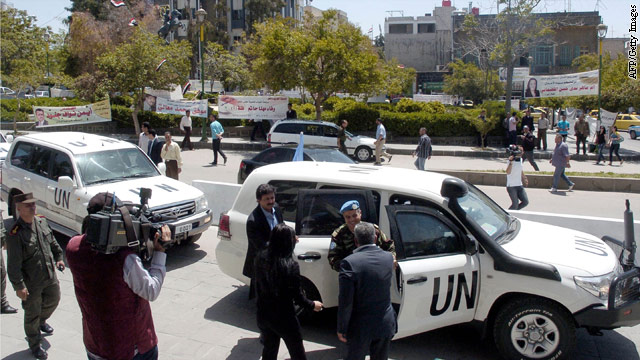 A “failing” Syrian plan gets some time

In diplomacy, "fail" is a strong word. So when State Department spokeswoman Victoria Nuland uses it, attention must be paid.

"Well, obviously, we can all see that it is the Assad regime that is failing to meet its obligations under the six-point plan," Nuland replied. "And as a result, the plan as a whole is failing thus far."

U.N. Secretary-General Ban Ki-moon says violence in Syria is escalating, and he is "greatly alarmed." It includes shelling in residential areas, he says, "in contravention of what the Syrian government has promised. This is totally unacceptable."

A key part of the plan, the deployment of international observers, also is running into trouble. Ultimately, there are supposed to be 300 observers, and they are supposed to be able to travel unimpeded wherever they want in the country, checking on security violations. The U.S. is not providing any monitors but is providing funding and logistics for them.

An advance team of 12 monitors already is running into problems. They have been limited in their movements, and the regime of President Bashar al-Assad wants to have the last word on which countries they come from. Most egregious, the U.N. says, is that it has credible reports that some Syrians who have talked with the monitors have later been arrested and, possibly, killed by regime troops.

The U.N. is trying to have 20 monitors in Syria by the end of this weekend and 100 in the country within a month. The U.N. insists that they be allowed to move wherever they want, speak to any Syrians they want and communicate securely with other monitors as well as with U.N. headquarters.

Nuland blames al-Assad for the failure of the plan to reach its objectives.

"Assad isn't living up to his half of the bargain," she said, something the U.S. and its allies "were concerned and skeptical about ... from the beginning."

Even if the deployment of monitors was running smoothly, it takes time to prepare them and get them into the country.

"You can't just take Joe Schmo off the street," Nuland said. "You have to take somebody who has experience and training in monitoring, understands U.N. standards, understands their obligations in terms of human rights."

The U.N. has to negotiate and sign contracts with each one of the governments that is sending personnel. In some cases, those governments also have to get parliamentary approval. Then there's the physical transport of the personnel.

"The U.N. reports that they've had an ample number of volunteers, that they are vetting them, that they are working at top speed to try to vet folks," explained Nuland, "but we've also had other difficulties involved with, you know, the Assad regime trying to veto or pick and choose among nationalities."

What could really torpedo the Annan plan, U.S. officials say, is if there were violence against monitors or retribution and assaults on populations after the monitors have been in place. Al-Assad, Nuland says, might try to "play some kind of a game where there are monitors here and there's violence there."

And yet, Nuland says, "Net-net, we still have a lower level of violence overall across Syria than we had before the Annan plan was agreed to." But the situation is made more complex by the fact that Syrians, in self-defense, are fighting government forces, and other groups are exploiting the continued instability.

The U.S. won't say how long it and its allies will give the Annan plan. The U.N. Security Council resolution authorizes the monitor operation for 90 days. "That's the scope that the U.N. has given before it reevaluates the mission," Nuland said, "but, frankly, you know, we ... could very well have to draw our own conclusions well before that."

In the meantime, going the extra mile with the Annan plan helps Washington make the case to less-supportive members of the Security Council like Russia and China that it tried its utmost to make it work. Failure could end up paving the way for more stringent action against Syria and a push for a "Chapter 7" resolution with travel sanctions, financial sanctions and an arms embargo.

If there is "complete failure," Nuland said, "then we're going to have to go back to New York. And that will be the case that we will make to other U.N. Security Council members."