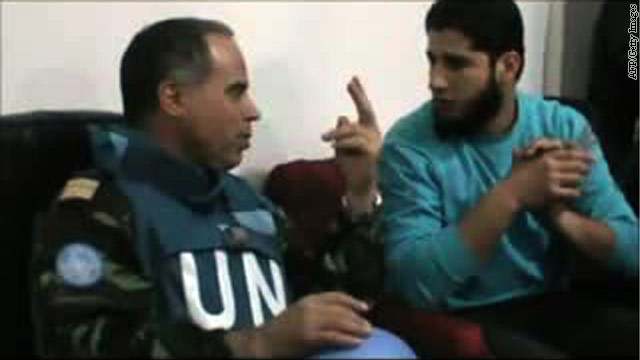 An image grab taken from a video uploaded on youtube on April 24, 2012, purportedly shows a UN observer from Morocco speaking with an opposition leader during a visit to the restive city of Homs.
April 24th, 2012
04:48 PM ET

Secretary of State Hillary Clinton said Tuesday that it is “absolutely deplorable” if reports are true and Syrian forces are harassing, arresting and possibly killing civilians who have approached United Nations observers in the country.

Clinton said she had just seen comments to that effect by Ahmed Fawzi, spokesman for Kofi Annan, the U.N./ Arab League joint special representative on Syria.

"It is absolutely deplorable if there is this kind of intimidation and harassment and possible violence against those Syrians who have every right to meet with and discuss the situation with the monitors. That's what the monitors are there for," Clinton said.

"Syria is at the crossroads," she continued. "I strongly condemn the reports that we heard earlier today and want to be kept totally informed about what is happening inside Syria, because the entire world is watching. The Syrian government made a commitment to not only permit the U.N. monitoring mission to move forward but to work on the Kofi Annan plan. We expect them to comply."

The secretary of state also said the U.S. is preparing "additional steps" in case the violence continues or if the U.N. monitors are prevented from doing their work.

Last week, after conferring with international partners at a Friends of Syria meeting in Paris, Clinton said the U.S. could seek a Chapter VII resolution at the U.N. Security Council to pressure the Syrian government.

"We need to start moving very vigorously in the Security Council for a Chapter 7 sanctions resolution, including travel, financial sanctions, an arms embargo and the pressure that that will give us on the regime to push for compliance with Kofi Annan’s six-point plan," Clinton said Friday.