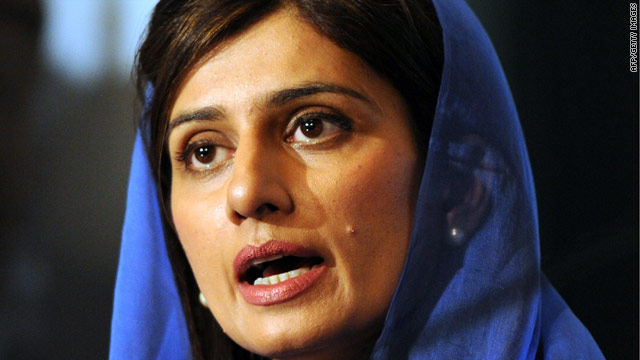 KHAR: Christiane, this is a process which is currently ongoing in Pakistan. As it happens, only yesterday, I appeared in front of what we call the Abbottabad Commission, which is looking into the presence of - the unexpected presence of Osama bin Laden in Pakistani territory.

And they are still at it. So I think we have to, from our side, at least, wait for the commission to come out with its analysis, with its report on what happened and how it happened.

AMANPOUR: So let me just ask you a little bit further. You know, obviously, that this commission has been meeting and investigating for months now. And even your own people, particularly your own newspapers, are saying, we need to know who was responsible for facilitating the most wanted man in the world hiding in our country, apparently safely.

Was it ordinary citizens? Was it law enforcement? Was it the military? Can you give us any details? I know the commission is still investigating, but anything you know.

KHAR: Christiane, I think one thing which is beyond doubt by now is - and it's not only coming in from our sources, this is coming in from the many, many sort of volumes of stuff which was taken in from his hideout, that there was no complicity in - on the part of anybody within the Pakistani administration.  And when I talk about the Pakistani administration, I talk about the whole of government.

And why do you think the U.S. has such a hard time believing that the most wanted man in the world could somehow be sheltered by ordinary citizens and his own network?

So I think we are, like the rest of the world, waiting to learn lessons from this, from the presence of Osama bin Laden inside Pakistani territory. But I want to also say that initially in the press, especially in the Western press, there was an impression given that he was living right under the nose of the military academy, for instance.

But as I said, this is something which concerns us as much as the rest of the world.