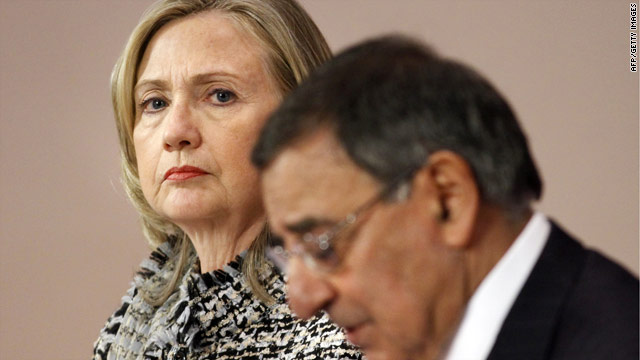 "As difficult a week as this has been in Kabul and other parts of Afghanistan, the big picture is clear," U.S. Secretary of State Hillary Clinton said Wednesday, citing attacks by insurgents. "The transition is on track. The Afghans are increasingly standing up for their own security and future, and NATO remains united in our support for the Lisbon timetable and an enduring commitment to Afghanistan."

The timetable was set at a November 2010 meeting that established a December 2014 deadline for completing the transition of security responsibilities to Afghanistan.

The talks come on the heels of Tuesday's announcement by Australia it could begin pulling its troops out of Afghanistan in the coming months, and the majority of them may leave the country by the end of next year. Other major contributors to the coalition, such as France, have accelerated their withdrawals. Others, such as Canada, withdrew most of their troops at the end of last year.

"It's within the line of our strategy that as we gradually hand over lead responsibility to the Afghans, we will also adapt our presence," NATO Secretary-General Anders Fogh Rasmussen said Wednesday.

The two-day meeting aims to streamline U.S. and NATO agreements about the pace of U.S. and allied withdrawal from combat in 2013, when Afghan forces are expected to take the lead with U.S. backup. In addition to finalizing plans to handover to the Afghan National Army, the talks will also address efforts to shore up the weak Afghan government after NATO forces leave at the end of 2014.

The NATO talks are expected to produce a strategic plan for NATO's role in Afghanistan through 2014 and beyond, as well as funding estimated at about $4 billion per year for sustaining the Afghan army and police after coalition forces pull out.

The funding issue threatens to derail a long-term security pact between the United States and Afghanistan, which President Barack Obama hopes to showcase in Chicago. Afghan President Hamid Karzai said the accord should spell out a yearly commitment of billions of U.S. dollars for the upkeep of the Afghan security forces.

The number of Afghan forces is going to reach 352,000 later this year. However, after 2014, the number is expected to dip to about 250,000, with a price tag of about $4.1 billion annually. While the United States doesn't want to foot the whole bill, Washington is pressing its European allies and other countries with troops in Afghanistan to pay about $1.3 billion.

Rasmussen urged NATO allies to contribute to the effort.

"A stable Afghanistan is in the interest of the whole international community, so I urge everyone to play their part" he said Wednesday.

The renewed violence, including coordinated militant attacks throughout the country and in Kabul's diplomatic district, has renewed fears that a rapid handover to Afghan forces will leave Afghanistan vulnerable to continued attacks by the Taliban.

Karzai on Sunday called the attacks an intelligence failure for Afghanistan and "especially for NATO."

NATO officials praised the ability of the Afghan security forces, who largely dealt with Sunday's attacks.

"We have really now seen in practice the Afghan security forces deal in a very professional way with security challenges," Rasmussen said. He noted that insurgent attacks were down 9 percent in 2011 from 2010, and that trend has continued the first few months of the year.

U.S. Defense Secretary Leon Panetta, addressing reporters along with Clinton, said Wednesday, "We know there will be continuing challenges ... but we must not allow any of that to undermine our commitment to our strategy."

Ministers also will discuss efforts to maintain defense capabilities in a time of shrinking budgets. On Thursday, Russian Foreign Minister Sergei Lavrov will join foreign ministers to discuss the deployment of NATO's missile defense system across Europe, which Moscow views as a threat.