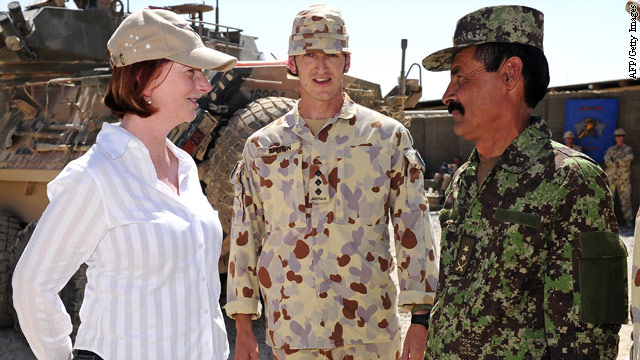 That timetable puts Australian forces on a quicker withdrawal schedule than Prime Minister Julia Gillard had previously described. In a speech to Parliament in November, she said the transition in the southern Uruzgan province, where most of the Australian troops are concentrated, might well be completed before the end of 2014.

Australia's drawdown comes on the heels of an announcement by U.S. Defense Secretary Leon Panetta in February that the United States hoped to end its combat mission in Afghanistan in 2013, transitioning primarily to a training role as Afghan forces take more responsibility for security. Britain, France and Germany all made similar pledges to begin an early drawdown, saying they intend to hand over their security operations to local forces by the end of 2013.

Some countries, like Canada and Norway, have already pulled out most of their troops.

So what gives with the early drawdowns? Is it war fatigue and the war's growing unpopularity in countries that are contributing troops that has NATO's International Security Assistance Force countries running for the hills?

Not so much, insist NATO officials. They maintain the trend was expected and signals the coalition's growing confidence in the country's fighting forces and the transition to Afghan security control.

Do the math, the NATO officials say. Afghan President Hamid Karzai is expected to announce in coming months that Afghan troops will begin the process of assuming a leading security role in a third tranche of provinces, including Uruzgan, a transition that should take 12 to 18 months. As the sources point out, that schedule for when Afghan forces are expected to have full security responsibility for the province matches the 2013 date announced by Australia. This, they say, is the transition at work.

Indeed, in her remarks on the drawdown, Gillard highlighted the progress made by Afghan troops, notably in Uruzgan. Plus, she noted Australia isn't cutting and running after 2013. Gillard said Australia is prepared to maintain a training role with the Afghan army and police even after the 2014 date when NATO expects Afghanistan to assume full responsibility for security.

While the first two tranches of transitioning to Afghans taking the security lead have gone pretty smoothly, the third batch might prove more difficult. The first two handovers were in areas where there was a light ISAF footprint to begin with. Now that the low-hanging fruit has been picked, Karzai is moving to areas that are more problematic, but doing so while ISAF forces are still on the ground to help.