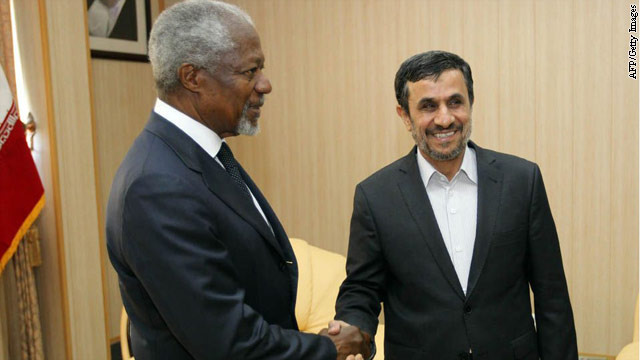 Turkish officials tell CNN that during his address to the ministers, Davutoglu is expected to reaffirm the urgency of the situation in Syria and urge further movement by the international community.

"Turkey always said there were two triggers for them on further involvement," one senior official said. "One was an overwhelming number of refugees - and they have told us the number is continuing to spike - and second is if the conflict bleeds across the border. Whether what happens in recent days constitutes this, we don't know yet."

The officials say they are taking the recent statements from United Nations-Arab League envoy Kofi Annan and his spokesman with a grain of salt. The officials say the administration realizes that Annan doesn't want to pronounce the potential cease-fire as dead before the Thursday deadline.

Second, he is in Tehran and could be playing to that audience. And third, it isn't as much about Syria it is about getting Russia and China on board for future action at the U.N. Security Council. The plan is to wait to be briefed by Annan, probably sometime Thursday, to hear his assessment first-hand.

After the Annan briefing, talks will continue in New York at the U.N. and among capitals about further action at the Security Council, the success of which will depend on what Russia and China are willing to go along with.

Syrian President Bashar al-Assad "is either going to do something, or he is not. That is not going to change the fact we are going to continue to put pressure on him," one senior official said. "But where we are now is focused on what our pals Russia and China are going to do about Assad if tomorrow comes and goes and he is still killing people."

Clinton meets with Russian Foreign Minister Sergei Lavrov on Thursday, but officials say Lavrov's comments about Syria to date have not been encouraging.