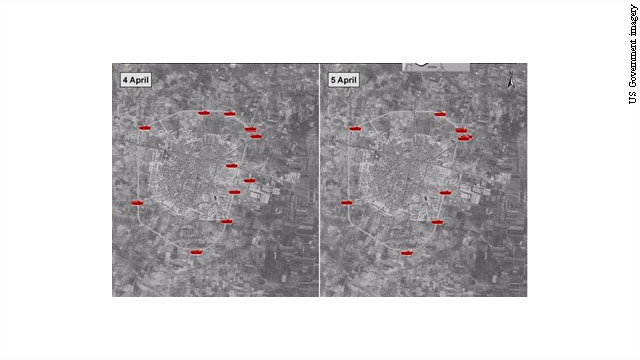 The U.S. has released de-classifed aerial reconnaissance photos of Syria, showing the level of compliance by government forces with an international plan to establish a cease fire which calls upon the Syrian government to remove its tropps and heavy weapons from their locations around cities no later than April 10, 2012.

The Ambassador to Syria, Robert Ford, currently in the United States after he was withdrawn from Damascus, writes in a commentary, that "there are some locales where the Syrian government did remove some forces, such as Da’el in Daraa province and Taftanaz in Idlib, following several days of assaults against the towns."

In some other places, he says, such as Homs and Zabadani the Syrian government kept artillery units near residential areas where they could again fire upon them.

In the absence of journalists, Ford says, "U.S. and other governments have other means, including the satellites that took these images, of verifying the regime's compliance or lack thereof. The regime and the Syrian people should know that we are watching. The regime cannot hide the truth."