A new image of the North Korean  launch pad at Tongchang-dong Space Launch Center (see photo above the story) shows what IHS Jane's Defense Weekly analyst Allison Puccioni says is "specific activity" on the pad, as well as at the rocket checkout assembly facility. The March 31 image was provided to CNN by GeoEye.

Puccioni compared the new image to a GeoEye image from March 20th and  March 28th. She notes the gantry on the umbilical tower has changed directions and more vehicles and objects are seen parked around the launch tower. What are likely fuel containers have been uncovered and stacked behind the fuel system, according to Puccioni. 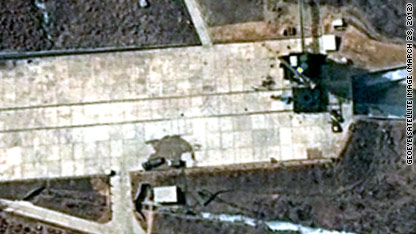 In addition, "the work platforms, which swivel in tiers around the launch block" have been rotated backwards in the new March 31 image. The platforms are connected, which Puccioni surmises are either to check out the platforms themselves or to allow workers to look at the launch tower itself or the fuel system. 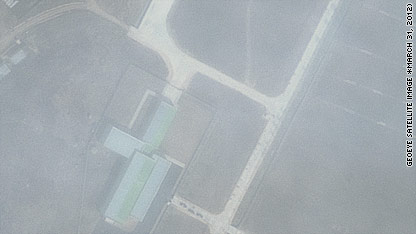 "That's where the action is happening" right now, Puccioni told Security Clearance. The vehicles do not appear to be large enough to be the transporters for bringing the rocket stages to the launch pad.

Nearby two mobile vehicles can be seen on a newly made road. Analysts believe those are part of a telemetry tracking system. 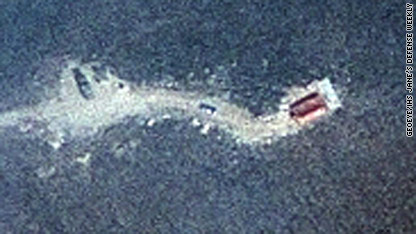 Additionally, there is evidence of a new surface around the missile assembly building and another buiding nearby, according to Puccini. The resurfacing could be either a beautification in advance of VIP visiting the facility or could be preparation for specialized heavy vehicles, Puccini said. 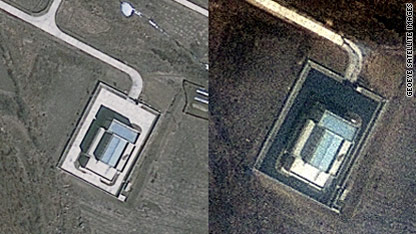 That paving is not surprising around the assembly building since it likely necessary to accomodate the transport vehicles that will carry the stages of the rocket to the launch pad, said Puccini. However, the fact the second building which was believe to be an administrative building could signify "that it is more important to the launch operations than previously thought," noted Puccini.

It could be a VIP support facility or it could be connected to the rocket operations, Puccini told Security Clearance."It may house something that will be added to the rocket like theoretically the payload (which in this case will be the satellite)," she explained.