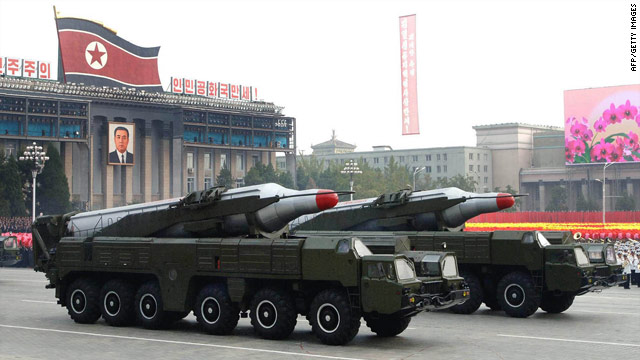 North Korea is building a long-range missile to launch later this month, according to South Korea's Chosun Ilbo newspaper, but American officials and experts who spoke to Security Clearance questioned whether it is anything more than a parade mock-up.

The report cites American and South Korean officials who say the missile is likely to be unveiled at the April 15 parade to honor the 100th anniversary of the birth of Kim Il-sung, who founded communist North Korea.

The 40-meter missile supposedly has a bigger booster and could give it the capability of reaching the United States, according to the report.

It is longer than the expected 32-meter rocket the regime is expected to use for its satellite launch between April 12 and 16.

A senior U.S. official told CNN's Elise Labott that the missile is believed to be a modified Taepodong-2, but it could just be a mock-up.

"The DPRK leadership excels in the field of pathological prevarication," the official said, using the shorthand for North Korea's official name, the Democratic People's Republic of Korea.

A Pentagon spokesman refused to discuss the U.S. assessment of the longest range of North Korean missiles. The United States is "monitoring all of this very closely," spokesman George Little said.

Weapons expert Charles Vick of GlobalSecurity.org told CNN's Larry Shaughnessy that he believes this is likely a ground test platform and not capable of actually flying.

But Vick noted the tower assembled at the new launch site is taller than the Teapodong-2 rocket, so one day it may be able to launch a taller rocket.

Another weapons analyst said North Korea is known putting mock-ups out for "the U.S. satellites to see." In the past, the regime has built a missile body to display before the actual missile has been built, according to David Wright of the Union of Concerned Scientists.