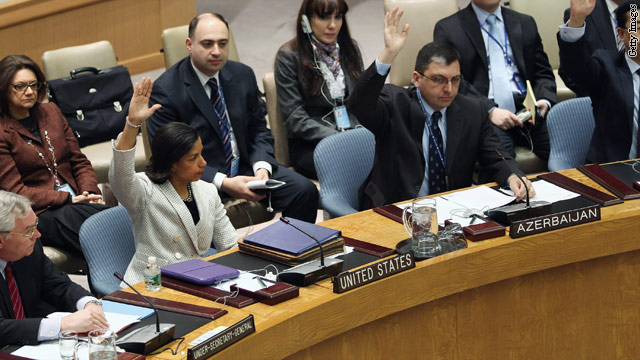 As a permanent member with veto power and biggest financial contributor, the United States enjoys a significant amount of influence in the Security Council even without the presidency.

Washington doesn't always get its way, though. The other four permanent members - Britain, France, Russia and China - also have a veto. Vetoes by Russia and China of two previous resolutions on Syria show the limits of power by any one country in the Security Council.

Bruce Jones, director of the Center on International Cooperation at New York University, says that while the U.S. won't have any huge new powers during its presidency, Rice will have a certain influence that comes with chairing the meetings. She can influence how Security Council resolutions and statements get introduced and how different negotiations are handled.

Much of the council's work focuses on specific crises, such as peacekeeping operations in Somalia and Sudan or the violence in Syria. But Jones notes the council presidency is an important opportunity for a country to shape a broader foreign policy agenda.

This is where "the really interesting aspect of the presidency is," says Jones. "In using the presidency, states can put issues on the agenda that are not otherwise part of the day-to-day routine."

Senior U.S. officials say that means highlighting and advancing some of the priorities of the Obama administration, such as nuclear security.

A session this month on nuclear nonproliferation, disarmament and security will follow the 2009 Security Council summit President Barack Obama led when his administration first held the presidency.

The United States will also lead a debate on trafficking of material goods and people.

Previous Security Council resolutions have often highlighted how so-called "illicit" flows can fuel some of the most critical threats to intentional peace and security, such as nuclear proliferation, terrorism and organized crime. This month's session will mark the beginning of a new focus by the council to see how the U.N. system can help member states combat trafficking.

Attention to women's rights, an issue close to the hearts of both Secretary of State Hillary Clinton and Rice, will also be highlighted by the U.S. presidency.

A session this month will focus on women's roles in peace and security.

Michelle Bachelet, U.N. women executive director, will also brief the council on efforts to get more women involved in conflict resolution and peace building. Several months ago, all Security Council countries were asked to put together a plan for engaging women on these issues, and the U.S. rolled its plan out a few months ago in anticipation of highlighting the issue during its council presidency.

But holding the Security Council presidency isn't all about chairing high level meetings.

The Security Council president is in close communication with the U.N. bureaucracy, including the secretariat, secretary-general's office and the General Assembly.

There are also U.N. mandates to be renewed. For example, the mandate for the joint U.N./African Union peacekeeping operation, UNAMID, is about to expire and needs to be renewed.

Officials say discussions about Darfur will enable the council to focus needed attention on the wider problems in Sudan and South Sudan, given the tense relations and ongoing clashes between the two countries. The Security Council will also hear from the force commander of UNISFA about the situation the disputed Abyei area.

There is also a monthly council session on the Middle East. While the agenda is typically broad, officials expect Syria to take up a large part of the consultations.

On Monday, the first working day of the U.S. presidency, former U.N. Secretary-General Kofi Annan and current U.N./Arab League envoy, will hold a closed-door briefing for the Security Council about the status of his peace plan. Should there be a political development in Syria or the violence increases further, it will be incumbent upon the United States to hold consultations and discuss next steps to address the crisis.

"Syria is the background for everything that will be on in our presidency and at the United Nations," one aide to Rice said. "It's our top priority to support Kofi Annan, find a way to stop the violence and create a political transition."

But officials are sensitive to expectations that after the two failed efforts to get the Security Council to pass a tough resolution on Syria, the United States now will be able to use its presidency to finally produce a text.

"Holding the Security Council presidency doesn't give you the ability to override a veto or change the dynamics of the council," the Rice aide said. "It allows you in part to set the agenda and highlight the issues important to your country.

As Security Council leader, the United States will also be at the mercy of developing crises and unforeseen events.

The situation in Mali, where members of the military recently staged a coup, could take an unexpected turn. North Korea could make good on its promise to launch a satellite during this month's festivities to mark the 100th birthday of the late founding leader Kim Il Sung, which the U.S. is calling cover for a long-range missile test.

Rice, who is considered a leading contender for secretary of state if Obama wins a second term, announced she will take to Twitter to read what people have to say about her role at the United Nations.

"My opening press conference as UNSC president is on Tuesday," she wrote. "Let us hear your questions."

During the next 30 days, you can #AskRice about her turn as madame president.