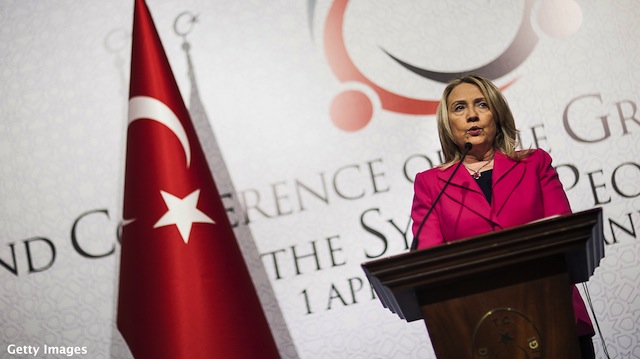 Clinton also said the U.S. is working with its partners to create a clearing house for data and evidence on violations of human rights abuses in the violence-torn country.

"Our message must be clear to those who give the orders and those who carry them out," she said. "Stop killing your fellow citizens or you will face serious consequences. Your countrymen will not forget, and neither will the international community."

A senior State Department official who briefed reporters on Clinton's plane as she flew to Istanbul from Riyadh, Saudi Arabia Saturday night, said the new "Syria Accountability Initiative" will assist and train the Syrian people to collect, collate, analyze and securely store evidence, documentation and other information concerning human rights abuses and violations, while protecting witnesses and sources.

The information, the official said, could be used for a variety of justice and reconciliation purposes, including developing dossiers for trials of individuals responsible for violations of international or domestic criminal laws.

Another senior State Department official said the U.S. will help provide training for Syrian investigators, lawyers, human rights supporters and other non-governmental organizations to collect the data and will establish a secure storage facility, including a database, for the information.

The U.S. will provide an initial $1.25 million for the initiative and is asking other nations to provide additional funding.

The aid, she said, is starting to get through, in spite of the Assad regime's efforts to deny access. In March the administration added another $2 million to its commitment, and Clinton Sunday announced more than $12 million for the Syrian people – for a total of nearly $25 million.

To support civil opposition groups the U.S. also is providing communications equipment that Clinton said "will help activists organize, evade attacks by the regime, and connect to the outside world."

Although U.S. officials, including Clinton, have expressed serious concern about the lack of unity among opposition groups, the opposition has adopted a "national pact," which senior State Department officials say is aimed at uniting the opposition around a "concept and vision... an idea" even if they are not uniting as a single group.

"We've seen here in Istanbul that disparate opposition factions can come together," Clinton said. "Despite the dangers they face, the next step is to take their case across Syria, to lead a national conversation about how to achieve the future Syrians want and deserve. That's how the opposition will demonstrate beyond any doubt that they hold the moral high ground, strip away Assad's remaining support, and expose the regime's hypocrisy."

The leading opposition group, the Syrian National Council, also is taking steps to be more transparent about itself, State Department officials say, and about what would be needed in order to bring other groups into the SNC.

At the Friends of Syria meeting Secretary Clinton is meeting with five members of the opposition: the Syrian National Council president Burhan Ghalioun; Basma Kadmani, who is on the executive board of the SNC; George Sabra, an orthodox Christian who recently left Syria via Jordan; Imad Din Al Rasheed, whom the official described as a "moderate Islamist"; and Medea Dagastani, a female member of the local council in Homs who recently left the city, which has been under attack by government forces.

Although U.S. officials have said the Syrian opposition is far less united that the Libyan opposition was at this stage, another official briefing reporters said: "It's going to look a lot more like the transition plan that we saw at a certain stage in Libya."

The SNC is asking the international community for financial support as well and it is creating a "salary program" for the opposition Free Syrian Army funded by several Gulf States. Previewing that announcement conference participants said that soldiers who defect from the regime's army and join the FSA would receive a salary. The program, the official, said might attract soldiers who are suffering in a deteriorating Syrian economy.

The cost of the program is expected to be in the "millions" of dollars, conference participants said, one of them adding that this could, in fact, increase the rate of defections which, in turn, could "contribute to the demoralization of the regime."

Addressing the Friends of Syria meeting, Clinton called it a "moment of truth." Bashar al-Assad so far has refused to honor his pledge to implement a plan to resolve the crisis proposed by the U.N. and Arab League special envoy Kofi Annan. "The time for excuses," she said, "is over."