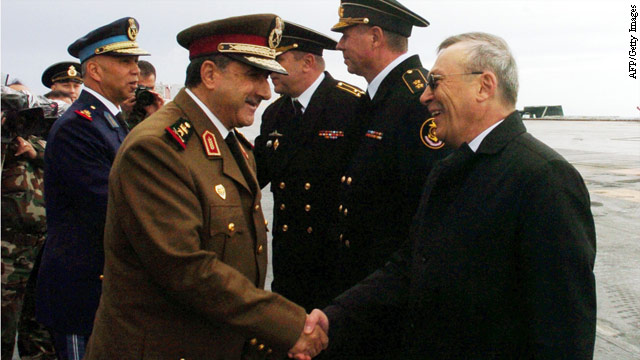 Syrian Defense Minister General Dawood Rajiha (L) is greeted on board during a visit to the Russian aircraft carrier Kuznetsov, in the port of Tartous in January.
March 30th, 2012
03:15 PM ET

The United States sanctioned three senior Syrian officials in President Bashar al-Assad's regime Friday as the yearlong violence in the country showed no signs of letting up.

Dawood Rajiha, Syria's defense minister; Munir Adanov, a senior Syrian Army official; and Zuhayr Shalish, the head of presidential security, were targeted in the action announced by the Treasury Department.

"The U.S. and the international community will hold to account those who stand with the Assad regime as it trains the instruments of war against Syrian civilians," David S. Cohen, under secretary for terrorism and financial intelligence, said in a written statement. "The time has long since passed for Syrian officials at all levels to turn their backs on this bloody regime."

The announcement comes as Secretary of State Hillary Clinton is set to meet with representatives of 60 other countries in Istanbul this weekend to discuss ways to support the fragmented Syrian opposition, and put the country on a path to democratic transition.

The United States, along with many other Western governments, has repeatedly called for al-Assad to step down, but has been stymied by Russian and Chinese opposition in the U.N. Security Council.

The sanctions prohibit U.S. citizens from engaging in any business or transactions with the three officials, and freezes any assets they have in U.S. jurisdictions.