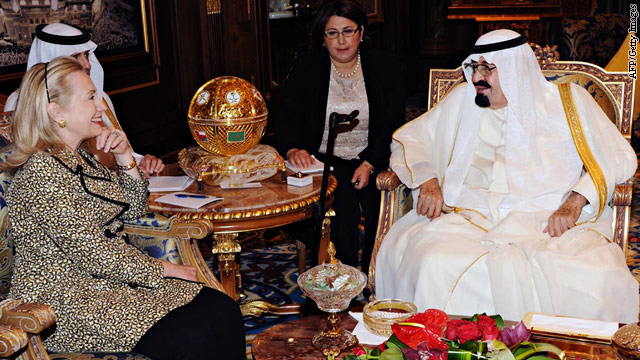 RIYADH, Saudi Arabia (CNN) - Kicking off a short but intense trip to the Middle East, U.S. Secretary of State Hillary Clinton is looking for help from America's friends in the region to address complex security challenges in Iran and Syria.

At her first stop Friday in the Saudi Arabian capital of Riyadh, Clinton briefed King Abdullah on plans for a meeting two weeks from now, at which Iran says its officials will discuss its nuclear program.

Clinton also discussed Saudi pledges to keep global oil supplies strong, at a time more nations are signing on to U.S.-led sanctions that require them to bar imports of Iranian oil.

The Gulf Cooperation Council's Security Cooperation Forum, which meets Saturday, is key to the U.S. approach in the region.

Aboard the plane with reporters flying in to cover Clinton's trip, a senior State Department official said the aim of the forum is "to provide a strategic context to the kind of defense cooperation that we already have with GCC nations." The six countries in the council are Bahrain, Saudi Arabia, Kuwait, Oman, Qatar and the United Arab Emirates.

The U.S. government wants a regional missile defense system, with the State Department official saying Washington is now working with each of its partners to develop an "architecture" based on the belief that, "in order to protect the (Persian Gulf region), no one can protect itself."

Asked whether that system is meant to protect against possible missile attacks from Iran - like the European system proposed by U.S. President Barack Obama's administration - the official said Iran "clearly (is) one of the most significant threats that these nations face."

There is no timeline, currently, to implement such a system in the Gulf region, the official noted.

"But it is a priority of our partnerships with GCC countries," added the official.

The United States has already sold a number of different missile defense systems to partners in the region, including Patriot missiles that the official said would form the "building blocks" for such a system.

Saturday's Security Cooperation forum also will include discussions on controlling weapons of mass destruction, maritime security, as well as the situations in Syria, Yemen and so-called Arab Spring countries.

After her trip to Saudi Arabia, Clinton will fly to Istanbul, Turkey, for a meeting on Sunday with the "Group of Friends of the Syrian People." Representatives from 60 nations have been invited to attend, ostensibly in an effort to help end the bloodshed in Syria.

Another senior State Department official told journalists that finding some way to get humanitarian aid to Syrians affected by the violence is a top priority.

Numerous nations, the official said, are trying to do more to address the situation, with other U.S. officials indicating some humanitarian is already getting to Syrian civilians along the embattled nation's borders.

A Syrian opposition group, the Syrian National Council, is scheduled to make a presentation to the meeting in Istanbul summarizing its efforts to unite the disparate groups that form the opposition. U.S. administration officials have expressed concern over their lack of cohesion and are urging them to lay out a plan for a post al-Assad Syria that would protect ethnic and religious groups.

"We are continuing to work with them to try to strengthen them in that regard," the official said. "They have been reporting that they expect to be able to make progress and to demonstrate progress at this meeting on Sunday, so we'll look forward to what they bring."

The official added that tightening economic sanctions on the Syrian regime will be a key topic at Istanbul, "particularly making sure that groups and regional organizations and individual nations that have committed to sanctions are fully implementing them."

In addition, the United States is "starting a conversation now about how we can begin to catalogue accountability issues ... in particular for atrocities committed during this period," the official said.

Washington has insisted that al-Assad's regime halt attacks by his security forces first, after which the armed opposition would lay down its arms.

Explaining how this would work, the State Department official said, "Get the guns silenced and then, as Assad takes steps to implement promises he made, then (U.N. and Arab League special envoy) Kofi Annan and others with influence with the opposition would make sure that their guns should be silenced as well."