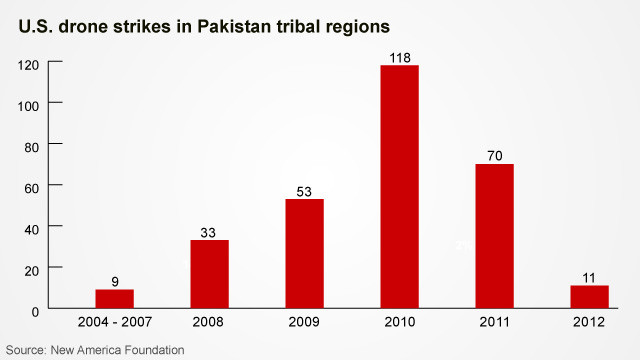 Bergen and Rowland write that the drone campaign in Pakistan had been slowing even before the deadly border incident that killed 24 Pakistani troops and put a freeze on a significant portion U.S. relations. There were 70 drone strikes in Pakistan's tribal regions in 2011, down from 118 in 2010, which saw the peak number of strikes since the program began.

Aware of how unpopular the drone strikes were becoming in Pakistan, some top U.S. Defense and State Department officials behind the scenes were pushing for more selective drone strikes, which the CIA opposed.  The White House ordered an evaluation of the drone program during the summer of 2011. The study found that the CIA was primarily killing low-level militants in its drone strikes.

Those results prompted the government to implement new rules in November governing when and how specific drone strikes were authorized. The State Department was given a larger say in the decision-making process. Pakistani leaders were promised advanced notification of some strikes. The CIA pledged to refrain from conducting strikes during visits by Pakistani officials to the United States.

But the new rules are unlikely to placate critics inside and outside of Pakistan, who condemn the violation of Pakistan's sovereignty and the killing of its civilians.

According to New America Foundation data, 7% of the fatalities resulting from drone strikes in 2011 were civilians, up 2 percentage points from our figure in 2010. Over the life of the CIA drone program in Pakistan from 2004 to 2012, we found that the civilian casualty rate has been 17%.