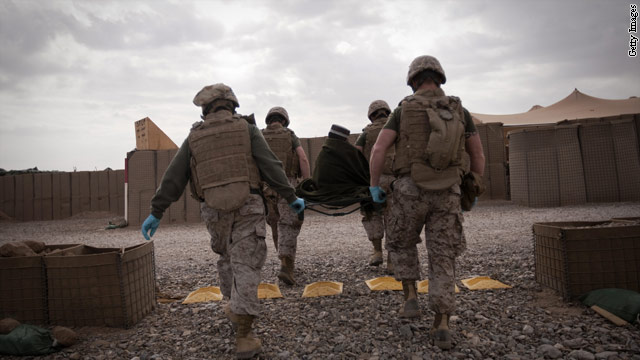 Pentagon spokesman John Kirby strongly echoed the sentiment, saying the military’s job is not to be driven by sentiments expressed in polls.

When asked the reaction to the poll from Gen. John Allen, the top commander in Afghanistan, Kirby said "his concern as a military commander in the field is getting the job done."

Kirby also insisted the recent spate of killings of U.S. troops by Afghan troops will not change the counter-insurgency strategy that requires the two sides to work hand-in-hand. Kirby said the incidents are concerning but still appear to be largely isolated and not connected.

But behind the scenes, one military officer who is a long-time source thought disillusionment in the ranks was already so entrenched it didn’t really matter that public sentiment appeared to be catching up.

The officer, who declined to be identified due to the sensitivity of his remarks, said the average soldier is now "wondering why he is there after 10 years."

"They are asking ‘What have we gotten ourselves into?’" he added.

Fundamentally, he said, many U.S. and Afghan troops hold each other in contempt.

"We think the Afghans are corrupt and won’t fight unless we pay them to, and they think we are disrespectful of them and their country."

The officer, who I have known for many years, served a tour of duty in Afghanistan and says senior commanders are not acknowledging the discontent felt in some of the ranks. His feeling was that U.S. troops now are extremely wary of their Afghan counterparts after a spate of recent killings by them in so-called green-on-blue incidents.

He said his feeling was one of "What have we gained after ten years?"

And the major problem may still be to come. The Afghan government is not expected to be able to fund its own military for many years.

"Are we going to be willing to spend billions forever? When the money stops will the Afghan army still be there?" wonders the officer.

So far there are no indications the strategy will change, or withdrawal of U.S. troops will be accelerated. But a successful counterinsurgency strategy does require support from the public and right now the question of both Afghan and U.S. public support certainly seems open to debate.