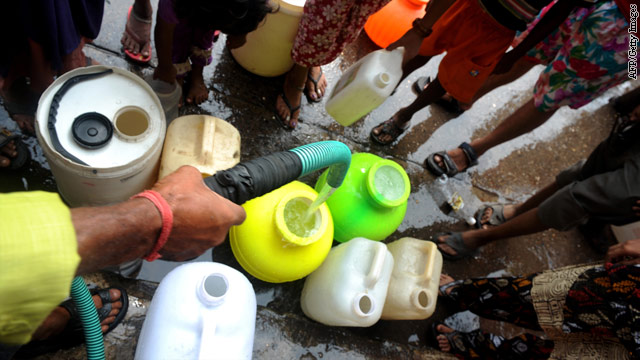 U.S. security at risk over water

Water shortages, polluted water and floods will increase the risk of instability in nations important to U.S. national security interests, according to a new U.S. intelligence community assessment released Thursday.

"During the next 10 years, many countries important to the United States will almost certainly experience water problems - shortages, poor water quality, or floods - that will contribute to the risk of instability and state failure and increase regional tensions," the report from the office of the director of national intelligence states.

The assessment focused on seven key river basins located in the Middle East, Asia and Africa that are considered strategically important to the United States: the Indus, Jordan, Mekong, Nile, Tigris-Euphrates, Amu Darya and Brahmaputra basins.

The intelligence report indicates conflict between nations over water problems is unlikely in the next 10 years, but after that, water in shared basins will increasingly be used by some nations as leverage over their neighbors, the report says.

A senior U.S. intelligence official who briefed reporters on the report said, "It's very difficult to be specific about where because it depends upon what individual states do and what actions are taken on water issues between states."

The study also warns of the potential for water to be used as a weapon, "with more powerful upstream nations impeding or cutting off downstream flow."

Water could also become a terrorist tool, according to the report. The U.S. official said that, "because terrorists are seeking more high visibility items to attack, in some cases we identified fragile water infrastructure that could potentially be a target for terrorism activity." A likely target would be dams.

The report indicates water supplies will not keep up with the increasing demand posed by a growing world population.

Climate change will further aggravate the water problems in many areas, as will continued economic development, the report says.

"The lack of adequate water," it says, "will be destabilizing factor in some countries because they do not have the financial resources or the technical ability to solve their internal water problems."

Food markets are threatened by depletion of ground water in some agriculture areas of the world. Unless corrective steps are taken, food production will decline, increasing the stress on global markets, the report predicts.

The intelligence community assessed that by 2040, water shortages and pollution will harm the economic performance of important trading partners.

The study does not name specific countries, because it is based on a classified national intelligence estimate.

But the report indicates that increasing populations, industrial development and climate change in South Asia, the Middle East and North Africa will make it difficult for those regions to deal with water problems.

The report does say that improved water management and investment in water-related sectors, such as agriculture, hydroelectric power and water treatment, could compensate for increased demand over next 30 years.

Since agriculture uses nearly 70% of all ground water, the report states it has the most potential to provide relief if technological changes are implemented such as large-scale drip irrigation systems.

The intelligence study suggests developing countries are likely to turn to the United States to lead the effort to resolve water problems, because of its technological capabilities.

Secretary of State Hillary Clinton, who was concerned about how global water problems could affect U.S. security interests over the next 30 years, requested the study on global water security. The National Intelligence Council prepared the assessment with contributions from 10 intelligence organizations.

At a World Water Day event at the State Department on Thursday,  Clinton labeled the report "sobering," and called on everyone to read it to "see how imperative clean water and access to water is to future peace, security, and prosperity, globally."

The Secretary also used the occasion to announce a new effort called the U.S. Water Partnership which bring together experts in the private sector and government to find system wide solutions to water problems.