Eleven countries, including Japan and European nations, have significantly reduced their Iran oil purchases and should not be subject to new U.S. sanctions, U.S. Secretary of State Hillary Clinton told Congress Tuesday.

The countries are Japan, Belgium, the Czech Republic, France, Germany, Greece, Italy, the Netherlands, Poland, Spain, and the United Kingdom, according to a State Department statement. END_OF_DOCUMENT_TOKEN_TO_BE_REPLACED

The U.S. educational system is facing “a national security crisis,” an independent task force has concluded.

“America’s failure to educate is affecting its national security,” said the Independent Task Force on U.S. Education Reform and National Security, which the council launched last year to focus on the problems in K-12 education.

Read how failures in the U.S. education system pose five threats to national security on CNN's Schools of Thought blog 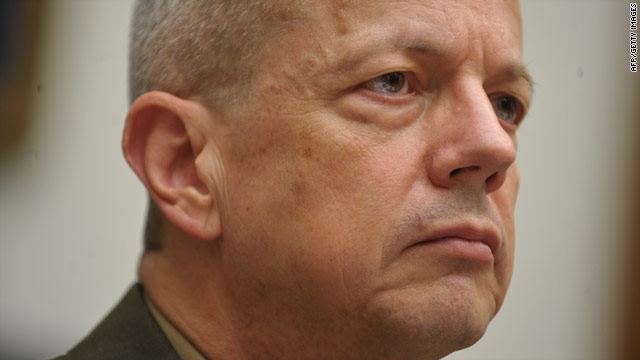 By Larry Shaughnessy, with reporting from Chris Lawrence at the Pentagon

The top commander of U.S. troops in Afghanistan insisted Tuesday that the war strategy remains "on track" even with recent setbacks that have sparked violence and Afghan anger toward the United States, such as the burning of Qurans and the killing of 16 Afghans, allegedly by a U.S. soldier.

"I wish I could tell you that this war was simple, and that progress could be easily measured. But that's not the way of counterinsurgencies. They are fraught with success and setbacks, which can exist in the same space and time, but each must be seen in the larger context of the overall campaign," Gen. John Allen told the House Armed Services committee. "I believe that the campaign is on track. We are making a difference. I know this, and our troops know this."

But perhaps the most moving part of the hearing came early on as Allen read a letter to the House Armed Service Committee from a Marine who died recently in Afghanistan.
END_OF_DOCUMENT_TOKEN_TO_BE_REPLACED

President Barack Obama says he is trying to lift the "electronic curtain" imposed by Iran's leadership by issuing new guidelines to allow American companies involved in Internet services to offer their products to Iranians.

"Increasingly, the Iranian people are denied the basic freedom to access the information that they want," the president says in a White House video released Tuesday in celebration of the holiday of Nowruz, Iran's new year.  "Instead, the Iranian government jams satellite signals to shut down television and radio broadcasts. It censors the Internet to control what the Iranian people can see and say. END_OF_DOCUMENT_TOKEN_TO_BE_REPLACED

Iran is buying American wheat for the first time in three years as it seeks to hedge against the growing impact of sanctions and weather-related crop shortages. Some 120,000 tonnes of hard red winter wheat grown in the Plains is on its way to the Islamic Republic, according to the U.S. Department of Agriculture. The sale of another 60,000 tonnes has been finalized, according to trade sources, and Iran may ultimately buy some 400,000 tonnes of U.S. wheat this year.

The purchases are part of a massive effort by the Islamic Republic to build up its grain stockpiles amid growing difficulties in financing imports of everything from steel to palm oil. At the same time, Iranian companies are devising elaborate workarounds to find new markets for crude oil exports.
END_OF_DOCUMENT_TOKEN_TO_BE_REPLACED