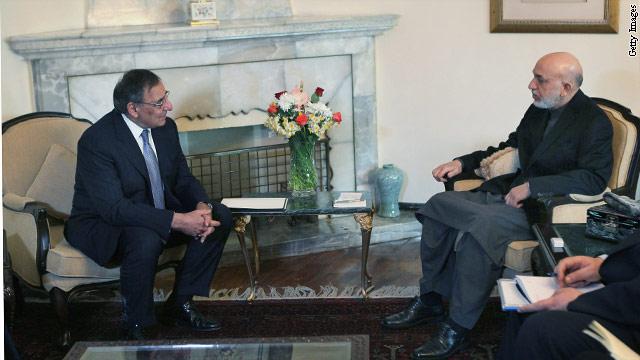 American troops should pull out of outposts in Afghan villages to their main bases, Afghan President Hamid Karzai told U.S. Defense Secretary Leon Panetta on Thursday, Karzai's office said, days after an American soldier was accused of leaving his outpost and killing 16 Afghan men, women and children in their villages.

Karzai called the shootings in Kandahar province a cruel act against the people of Afghanistan, and told Panetta that Afghans have lost trust in international forces, the presidential palace said in a statement.

Afghans took to the streets of one city Thursday to demand that the U.S. suspect be prosecuted in Afghanistan, while an Afghan lawmaker accused the United States of showing "a fake video ... to convince the Afghan people that it was the act of only one soldier."

Muhammad Naim Lalai said he was one of several Afghan officials shown a surveillance video on the soldier's base in Kandahar province.

"We were shown a video in which a soldier climbs the wall of a military base and then goes indoors and pulls his bullet-proof jacket off and then puts his arms up to surrender himself," Lalai told CNN, expressing doubt that the video was genuine.

The United States has not confirmed it showed footage from the base to Afghans, but a U.S. official has confirmed there is a video showing the suspect laying on the ground outside the base and then attempting to "low crawl" back into the outpost.

Also Thursday, the Afghan Taliban announced they were suspending an office they opened this year in the Gulf state of Qatar, designed to enable talks with the United States.

The Taliban's e-mailed blamed what the group called the Americans' "ever-changing position." The move came after the Taliban threatened to behead Americans in retaliation for Sunday's killings.

The U.S. suspect was flown out of the country Wednesday before Panetta met Karzai in Kabul on Thursday morning.

Karzai pressed Panetta for international forces to hand over security control of the country to the Afghan military by 2013 instead of 2014, his office said.

President Barack Obama said Wednesday that a summit of NATO leaders in May in Chicago will "determine the next phase of transition," including "shifting to a support role next year ... in advance of Afghans' taking full responsibility for security in 2014."

Panetta was wrapping up a two-day trip, the first by a high-ranking American official since Sunday's killings in the Panjwai district of Afghanistan's Kandahar province. Panetta's trip was scheduled before the attacks.

In Qalat, a city near the two villages at the center of the rampage, protesters chanted anti-American slogans, called for justice and demanded the soldier be publicly prosecuted in Afghanistan.

The demonstration was organized by religious leaders, according to Muhammad Jan Rasuli, the deputy governor of the Zabul province.

The unidentified Army staff sergeant was transferred out of the country on the recommendation of advisers to Gen. John Allen, the commander of the NATO-led International Security Assistance Force.

"We do not have the proper facility in Afghanistan to detain him for longer than he is being held," said Capt. John Kirby, a Pentagon spokesman.

A Defense Department official, speaking on condition of anonymity, said the man was flown to Kuwait, which has the U.S. military legal infrastructure and personnel to deal with the suspect. The official was not authorized to release details to the media.

The soldier is accused of leaving the remote outpost of Camp Belambay on foot early Sunday and heading to neighboring villages outside the base.

In the villages, the soldier opened fire as he went house to house, killing nine children, three women and four men, witnesses and Afghan authorities said. The U.S. military has not confirmed the number of casualties.

Three military officials told CNN there is still no understanding of what made the suspect murder Afghan civilians, a potential capital crime that Panetta says the soldier has acknowledged.

"We don't know what made him snap. Did he see a buddy get killed? Did something happen out there in the days before this incident? We just don't know," said one military official familiar with initial investigation reports.

The soldier, who is based at Joint Base Lewis-McChord near Tacoma, Washington, belongs to the 3rd Stryker Brigade Combat Team, 2nd Infantry Division, according to a congressional source who was not authorized to speak publicly.

He was on his first tour to Afghanistan but had deployed to Iraq three times. In 2010, he suffered a traumatic brain injury in a vehicle accident. But few details have surfaced about motive or why an infantryman would turn his gun on civilians.

Military authorities have presented a determination of probable cause to allow them to keep the sergeant in detention, an International Security Assistance Force official told CNN.

Meanwhile, an Afghan man who stole a vehicle that exploded Wednesday after he crashed it near the runway at Camp Bastion about the same time as Panetta's arrival has died from his injuries, Lt. Gen. Curtis Scaparrotti told reporters.

The Afghan was wearing a "desert utility uniform," similar to the ones coalition troops give to translators and other unarmed locals working with them, a defense official said. Coalition troops searched the man after putting out the flames and apprehending him, but they did not find an explosive device on him, according to the official. No motive or the Afghan's intent was known

Despite some protests and local violence, the country has not erupted the way it did last month when American troops burned copies of the Quran and other Islamic religious materials. Military officials said the materials had been seized from Afghan prisoners because they contained extremist messages.