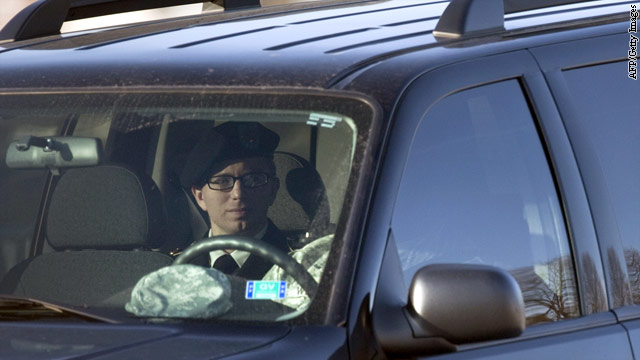 The U.S. Army soldier suspected of leaking a trove of classified military and diplomatic information to WikiLeaks cannot get a fair trial because prosecutors have failed to comply with the rules of court-martial, Bradley Manning's attorney said Thursday at a hearing at Fort Meade in Maryland. The hearing is the latest in the Manning case which is expected to go to military trial this year.

David Coombs, a private attorney whose fees have been paid by Manning supporters around the world, handed a military judge a motion to dismiss all 22 charges Manning is facing.

Coombs accused the government of not disclosing information, as required, that could be helpful in defending Manning. Prosecutors have said that the information can not be released because it is classified.

"It's startling, it's frightening to think that's what the government believes is its obligation," Coombs told the judge. "If the government doesn't wish to turn over the items we've requested, they have to go through procedures. They can't just say 'That's classified, denied,' and that's what they've been doing."

Prosecutors told the judge that they have complied with rules governing the mandatory disclosure of non-classified evidence but that the judge has not explained to them how they can disclose evidence categorized as classified. It is common for defense attorneys to seek dismissal of charges as part of their pre-trial strategy, a military briefer told reporters on background during a midday recess.

The judge did not immediately rule on the motion.

Manning is facing charges including aiding the enemy, wrongfully causing intelligence to be published on the Internet, transmitting national defense information and theft of public property or records. He could go to prison for life.

Coombs hasn't said whether he'll request a trial by a military judge, by a panel of senior officers or by a panel that includes one-third enlisted non-commissioned officers.

He spent much of Thursday's hearing arguing to call witnesses who could address whether the information that appeared on WikiLeaks caused any damage to national security. It's an argument Coombs has made in the past.

Coombs has frequently written about the case on his blog.

The military judge declined several defense motions regarding how prosecutors have worded Manning's charging document. Col. Denise Lind rejected a defense claim that the specifications are too vague to properly defend against. The defense also lost an argument against allowing prosecutors to file a late objection to a judge's review of other pre-trial defense moves.

Prosecutors convinced the judge they deserved to change their mind after not getting e-mail notification of the proposal in time to be considered at an earlier hearing. The e-mail problem was linked with spam filters on government computers that blocked prosecutors from getting e-mails that included the word "WikiLeaks."